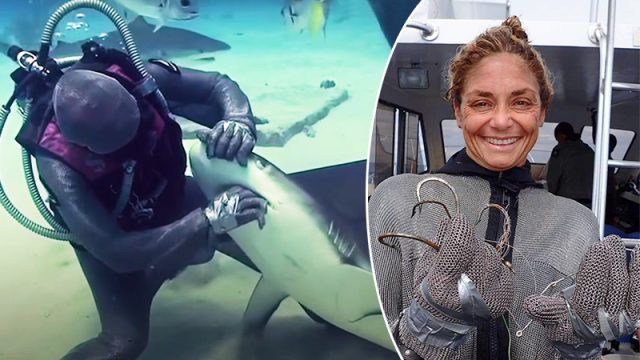 Christina Zenato’s patients are not ordinary, and her office just happens to be underwater. Meet the brave lady who works in the Bahamas being a “dentist” to sharks.

Zenato has always loved the ocean and sea creatures.

“My dream job was to be an underwater scuba ranger. Go go roam around the oceans of the world and make sure the reef is protected. And I will have sharks for friends,” Zenato says in the video by The Dodo.

Ready to cave dive on the Nat Geo Abaco Blue Holes ExpeditionsThank you Maria Fadiman for this capture.

Zenato recalls, one day in 1994, she booked a trip to the Bahamas and went on to a scuba dive training camp. On one dive, she got to feed sharks—and that left its mark on her.

She came back from her trip with a new mission in her life. She packed up her things and told everyone she would be gone for a year, and that was 24 years ago.

The "tonic picture" by amazing friend and photographer Eddy Raphael

In the years she has been doing this, she says she can read the sharks better than her own dogs and has earned the nickname the “Shark Whisperer.”

“I can see when a shark is having an uncomfortable day, and I can tell when the sharks are mellow,” Zenato says in the video. “I do recognize each and every one of them.”

After years of studying the sharks’ behavior and building a rapport with them, she has gotten to the point where they are comfortable enough with her that she can remove the various hooks that might be bothering the sharks.

“With the right knowledge and understanding, I think it’s one of the safest animals in the wild to be with,” she says.

To date, she has removed around 250 hooks from the mouths of sharks over the last fifteen years, according to BNQT.

Happy on the surface with the hooks removed

“Any day I spend in the water with sharks beats anything else for me,” she says.

Zenato was inducted into the Women Divers Hall of Fame in 2011. She believes there is great power in education and volunteers time to teaching students from around the world.

She says, “There are no shark-infested waters. The waters belong to them and we need sharks in the waters. These are the ambassadors and they are my sharks and I will take care of them as much as I can.”