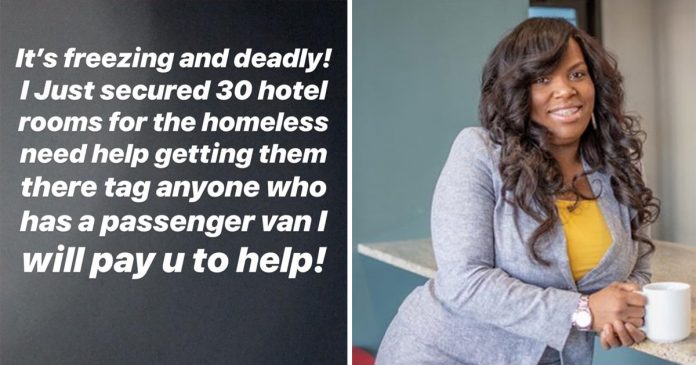 A woman posted on social media on paying for hotel rooms for the homeless during the polar vortex after she realized how dangerous it could be to be outside during the extreme weather.

Candice Payne, 34, posted about paying for the rooms on social media websites.

She kicked off the effort, “impulsively charging 20 hotel rooms on her American Express card after realizing how dangerous this week’s sub-zero temperatures would be for the Chicagoans without homes,” reported CBS Chicago.

Her Instagram post says, “It’s freezing and deadly! I just secured 30 hotel rooms for the homeless. Need help getting them there, tag anyone who has a passenger van I will pay u to help!”

The homeless people were camped out in a tent city when one of the propane tanks they were using exploded due to being too close to a space heater.

Payne said that they often pass by the homeless camp, which was near Roosevelt Road and Des Plaines Avenue. “We wanted to get as much of them out of there as possible,” she said.

“It’s not much but to get them out the cold, feed them, and provide them with warm clean clothes is a start,” Payne, a real estate investor for 5th Group Realty, said.

That’s when other volunteers stepped in and offered to pay for hotel rooms for the group, which was reported at over 100 people.

“Maybe they didn’t know how to or where to start to help, so I’m glad that I was able to be that vehicle,” she said.

“This is just regular people trying to help,” she added to the Chicago Tribune, noting that her husband was involved as well.

Extraordinary photo of Lake Michigan during the polar vortex.

In total, 60 hotel rooms were paid for at Amber Inn, the only place Payne and her husband could find that would take in the homeless people. A receptionist at the hotel said that the group of approximately 120 people nearly filled the entire inn.

An ice breaking ship cleared a path through the Chicago River pic.twitter.com/QUEOYFceRi

“It was really good to get out of the cold,” Asia Walker, a homeless woman, said.

Another homeless man named Robert who accepted the offer told CBS that Payne was an angel. “We hear about that on the news and other places but I seen it up close and personal today, and I really want to thank y’all for looking out for our people,” Robert said.