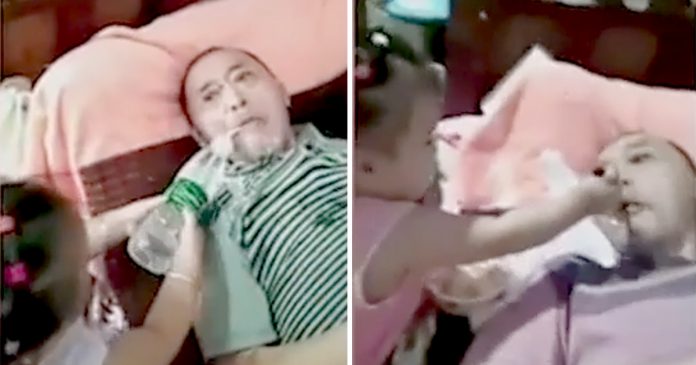 When he was younger, an elderly man from Rongchang District of Chongqin, China adopted a daughter and is now blessed with a cute little granddaughter. However, their lives changed when the elderly man had a stroke and was bedridden.

In a one minute and four seconds video shared on YouTube, the little one was seen carefully holding a bowl with her left hand and using a spoon in another hand and carefully feed her grandfather with patience.

The little girl feeding her grandfather.

After feeding, the little girl went to the water dispenser and get some water for her grandfather. She carefully filled the bottle with water and even got him a straw to drink. The smart girl was also seen adjusting the bottle to her grandfather’s position so that it would be easier for him to drink.

She wanted to bring the water to her grandfather.

Managed to get the water from the water dispenser and gave it to her grandfather.

She’s only one and a half years old but has so much sense of responsibility and patience in her. Probably learning from her mother and father, the little girl did not ignore her sick grandfather and continue to take care of him just like her parents.

After watching the heartwarming video, the people were saying that having a family that can care for you in times of hardship like this one is definitely greater than having a child of your own blood.

What a smart girl!

Separated since she was 5, photographer met her father while taking...