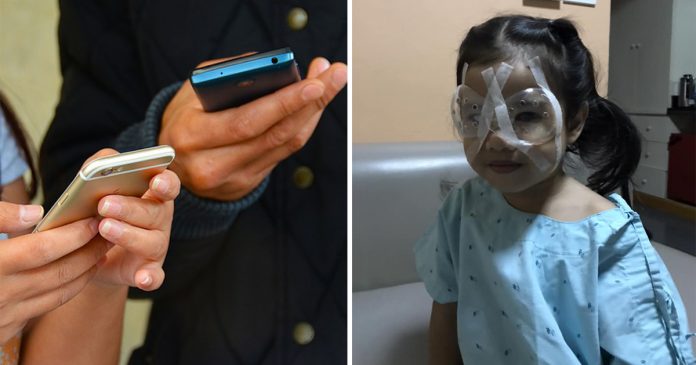 Wireless devices have become an integral part of our lives that it often becomes an inconvenience to live without them. However, not many know that these electronic gadgets emit blue light which can be harmful to our health.

While it may pose an insignificant effect on our health if used in a brief amount of time, the blue light can greatly affect the eyes after long exposure.

That was what happened to a 4-year-old girl from Thailand who had to learn the lesson the hard way after she had to undergo eye surgery due to excessive use of mobile phone.

According to her father, Dachar Nuysticker Chuayduang, he has let his daughter use the device since she was very young—at a tender age of two years old.

The little girl later was addicted to the smartphone and gradually, she developed a lazy eye when she was only four years old.

A lazy eye or amblyopia occurs when the vision becomes impaired but it cannot be corrected with the help of spectacles and is not caused by any eye disease.

The father further added that his daughter was given spectacles to improve her eye condition.

However, her eyesight became worse over time to the point where eye surgery was needed.

That was when he discovered that the reason for his daughter’s deteriorating eyesight was due to excessive exposure of smartphone.

Luckily, the surgery went well and now, his daughter can use both eyes well and is recovering. However, the doctor has banned her from watching television and using smartphone altogether.

Following the incident, the father decided to post about his daughter’s story to warn other parents about the harmful effect of excessive use of smartphone in young children.

While using gadgets such as a smartphone cannot be avoided sometimes, it is best for parents to restrict the time their children spend on using digital gadgets.

As young children’s eyes are not yet fully developed, the blue light can be more harmful to them compared to adults.

Hence, experts suggest that the screen time for children younger than 5 years old should be limited to just one hour.