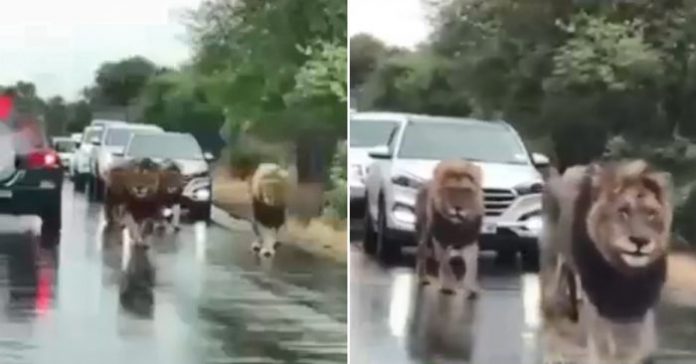 The vehicles passing through the road slowed down when it was forced to follow behind the group of lions on the road. The drivers did not seem annoyed or angry, and were very excited to see the lions.

The majestic animals look great taking casual strolls and ignoring the vehicles that follow them close behind.

They were identified as part of the famous Mantimahle lion coalition in Kruger National Park.

According to Stuff NZ, lion coalitions are normally made up of brothers, and often half-brothers, and cousins. Successful coalitions find female lions, and gain access to them by chasing away resident males.

A landscape from part of National Kruger Park.

The video was shared by a Facebook page named ‘Lions Of Kruger Park And Sabi Sand’. Both Kruger National Park and Sabi Sand are two of South Africa’s most popular safari destinations. Due to their close proximity to one another, they share an unfenced border whereby the animals are free to roam within.

Watch them in viral video below: