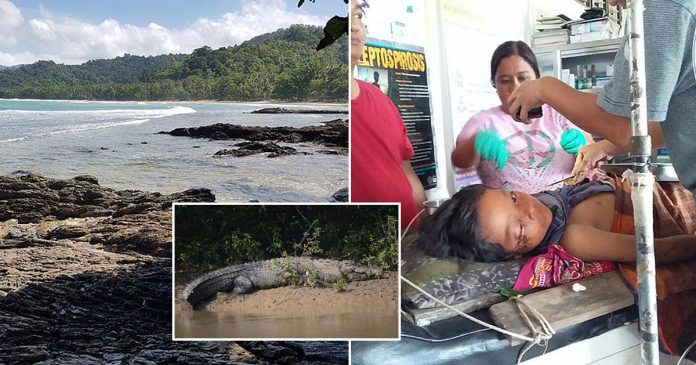 While he was having fun swimming with his younger brother in a river near the family home in Balabac town, in the Palawan region of the Philippines, the 12-year-old Diego Abulhasan was unexpectedly attacked by a crocodile.

Stunned by the sudden calls for help by his son, Tejada Abulhasan dashed from home to the river and dived in. Using only a plank of wood, Tejada started beating the crocodile and repeatedly punched the killer animal’s snout.

The river in Balabac where it happened.

After the endless beating by Tejada, unfortunately, the crocodile still would not let go of Diego. Desperate times call for desperate measures, Tejada grabbed hold of the crocodile and bite into its leg several times.

Probably bothered by the unexpected biting, the crocodile released the boy and swam away from the area. Right after that, Tejada rushed his injured son to the hospital.

Tejada told the police that he didn’t think twice to jump and wrestle the crocodile for the sake of his son.

“Then out of nowhere, I had the idea to bite him. I grabbed his leg and just bit as hard as I could like a Rottweiler dog.”

The spokesman from the MIMAROPA (Mindoro provinces, Marinduque, Romblon and Palawan) regional police, Superintendent Socrates Faltado said that Diego was really fortunate that his father was very brave because he could have drowned there.

Thanks to Tejada’s heroic act, Diego only suffered wounds from the crocodile.

With several scars but no lasting serious injuries, Diego spent two nights in hospital before being released.

He is so fearless!