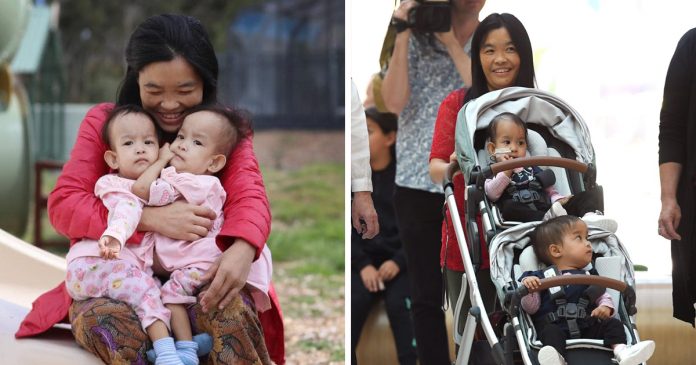 A pair of twin sisters, Nima and Dawa in the Himalayan nation of Bhutan were born conjoined at the lower chest and made it hard for them to lead a normal life.

Thanks to a kindhearted donor, the conjoined twins finally found hope to live a life apart from one another. With their funds taken care of, the twins with their mother flew to Melbourne, Australia to undergo surgery to separate them.

Nima and Dawa are conjoined twins.

They fly to Melbourne for the surgery.

The family arrived in the southern Australian city and the twins were admitted into the Royal Children’s Hospital.

Nima and Dawa at the Children First Foundation Miracle Smiles Retreat in Kilmore.

Besides fused together at the torso, Nima and Dawa also shared a liver.

Hence, the doctors would need to see more closely just what was shared and what was separate. Doctors also said that the twins need to build their strength before the surgery as the girls had nutritional deficiencies.

They were finally separated after a 6-hour-long operation on November 9, 2018.

“They’re really cheeky, they’re not far from one another at any time at all and they’re still in the same bed. We try to have them a little bit apart, but they manage bum shuffle back together and have their legs intertwined, always,” said the nursing coordinator Kellie Smith.

They’re used to cuddling all the time.

Probably used to be living so close to each other all the time, the cheeky twins turns cranky whenever the hospital staff tried putting them on different beds. The areas of surgery are healing well and the cute twins are slowly getting back to their life-a more normal life.

According to Kuensel Online, the twins would be home in February 2019 after more than four months recuperating in Australia.

Modeling agency only accepts models over 45 to challenge the fashion...