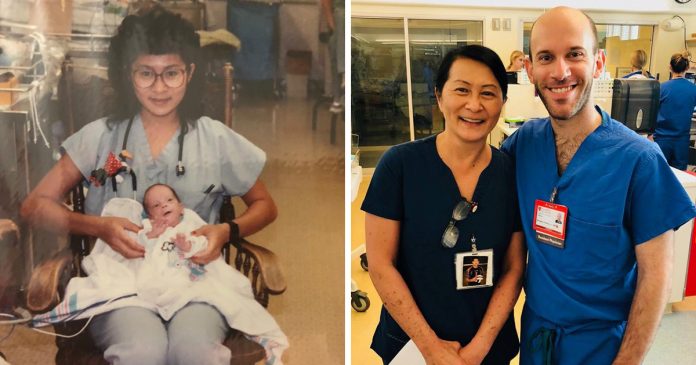 Nearly three decades ago, Vilma Wong, a Californian nurse, cared for a preterm baby. It was something she did a lot, considering the fact that she was working at NICU. Fast forward to present day at Stanford University, Brandon Seminatore, a second year pediatric resident, joined Vilma’s team where he was required to complete a child neurology residency.

“His last name sounded very familiar when I asked his name,” Vilma said. “I asked where was he from, and he told me that he was born in San Jose, California and he knew he was a premature baby borned at our hospital.”

Then something clicked. Vilma asked if his dad was a police officer and a big silence ensued. He asked her, “Are you Vilma?”

Apparently, Brandon’s mom told him to ask around for a nurse named Vilma when she found out about his residency. His parents were very excited and amazed to hear their son is now working with the nurse who helped save his life!

His parents even sent a picture of Vilma holding him as a baby for proof!

A wonderful twist of fate.

“My parents told me that I needed an incubator to keep me warm, a ventilator to help me breathe, getting endlessly poked and prodded to make sure I was making progress,” said Seminatore.

“Meeting Vilma was so surreal. I never thought I would meet a provider who cared for me when I was a baby.”

Such a heartwarming story of reunion and the powerful care of nurses for premature babies, that the hospital had to write something about this on their Facebook page.