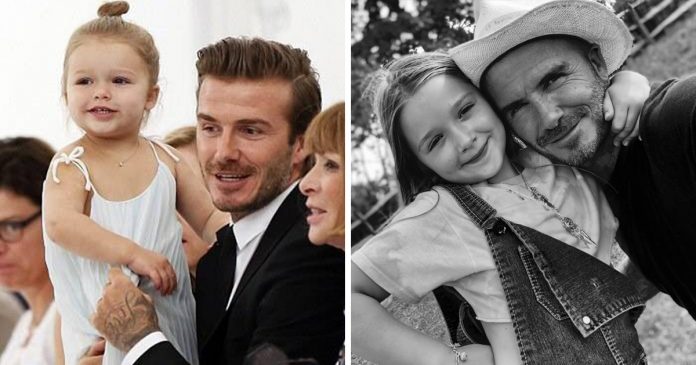 Former football captain and Hollywood celebrity, David Beckham is fast and skilled on the turf but he also proves that he is a doting dad to his four children, especially to his only daughter, Harper Seven.

After welcoming three sons into their marriage, David and Victoria Beckham announced the birth of their only daughter on July 10, 2011.

He was reported to be over the moon when he first learned that he and his wife were getting a daughter.

“Obviously, having three boys, you kind of expect another one, so finding out a little girl is in there is surprising, but, obviously, we are over the moon,” he told People.

It was apparent that David was thrilled to have Harper as he often went out with her cute daughter in matching outfits.

At the age of just a few months old, Harper was already well-known for her adorable high-end toddler outfits.

Thanks to Victoria Beckham who is also a world-renowned fashion designer, Harper never failed to make headlines with her stylish looks.

The youngest of the Beckham brood is also close to her famous father as she often makes a regular presence on David’s Instagram.

When asked about how different raising a daughter compared to sons, David admitted that he often gave in to Harper while being stricter with his sons.

“I have no power with that little girl—no power whatsoever,” he said.

“I love all my children, of course, equally but I’m definitely stricter with the boys than I am Harper, which gets me in trouble with my wife of course.”

Now, aged 8, Harper has grown up from being an adorable toddler to a beautiful young girl. However, that does not mean that David will stop spoiling her with love and lavish gifts.

In celebration of her turning seven last July, David gave her a new pony and wrote a sweet caption on Instagram.

“What can I say about my little princess other than she is perfect in every possible way. Harper Seven has turned 7. Happy birthday to my big girl!!,” the star wrote.

“This little one is so loved by her brothers, mummy and daddy…special special little girl. makes me smile every single day,” he added.

What a lucky little girl!