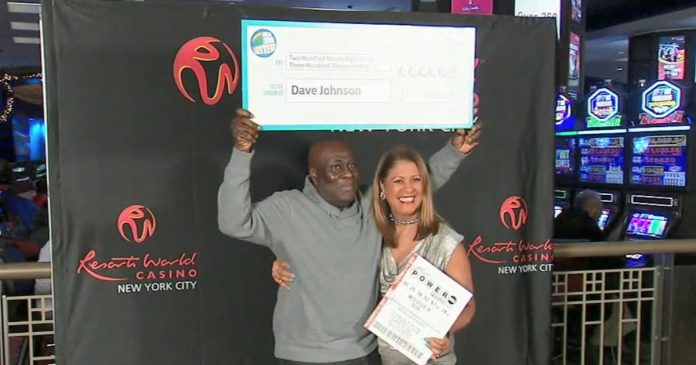 Getting rich overnight is only a scene we’ve seen on televisions—until we hear this story.

A man named Dave Johnson from Brooklyn went from a truck driver to a millionaire in just one night after winning the second-largest Powerball jackpot in New York Lottery history.

The 56-year-old Johnson worked across the street from Arnold’s Service Station on East New York where he bought the winning ticket for only $5.

He won the December 26 drawing for the $298.3 million jackpot and his win marks the third consecutive Powerball jackpot win by a New Yorker in 2018.

Johnson told WABC-TV that he will enjoy his early retirement as he already quit his job as a truck driver. However, the lucky man said he didn’t realize that he had won the jackpot until he was alerted by a co-worker.

“A friend of mine, a next driver for the company, called me and said ‘Hey Dave! Somebody won the Powerball by the gas station’. I turned to myself I said, ‘Aw that’s not me man, that’s not my luck’.”

Despite that, Johnson still didn’t check his ticket until his friend called him a second time urging him to do so.

Two days later on his way to work, Johnson finally realized that he actually won.

“I went to the store and gave the ticket to the clerk to check. He scanned it and said ‘Congratulations’. I needed to see it for myself, so I scanned and saw it read BIG WINNER,” recalled Johnson of his winning moment.

He received his winnings on Friday at Resorts World Casino in Queens.

Johnson now has an attorney who will help him invest the money and take care of his family. Top of the list, Johnson will finally buy the red Porsche he always wanted-just so people can see him driving that on the street.

What a lucky man!