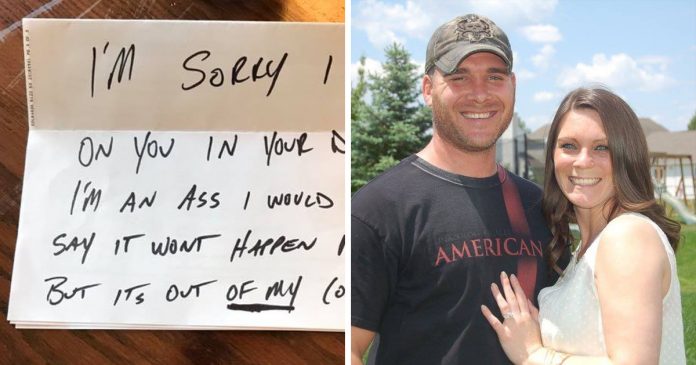 Chris Kent works as a firefighter. One day, when he returned home after a 36-hour shift, he was confronted by his wife about a strange dream and found himself in hot water.

Cheating is never acceptable no matter what excuses one gives to justify the act but what if it happens in dreamland?

His wife who is a nurse told him about the dream in which she saw him cheating on her. Even though it may have been just a dream, she was clearly not happy with it.

Although Kent explained to his wife that he would never do those things in real life, she was still not convinced.

Later, an idea came across his mind. Kent went to a flower shop with his daughter to buy a flower bouquet of red roses as a token of apology over his ‘cheating’.

The loving husband also wrote a letter to his wife, stating that he was sorry. “I’m sorry I cheated on you in your dreams,” Kent wrote in the letter.

“… I would love to say it won’t happen again but it’s out of my control. Haha,” he continued.

Fortunately, the funny letter and the bouquet of roses managed to win his wife’s heart back!

In his story, Kent also advised other couples to show appreciation to their partner and not to just reserve the love and affection on special occasions.

“In our marriage and while we were dating it has always been important for me to show love, always not just on special occasions and of course make her laugh,” Kent wrote.

“I’ve always been the type to get flowers not only on those special occasions but also on a random Tuesday or whenever the mood struck me.”

He also hoped that the incident would teach his children a good example.

“When my sons see how I treat my wife I hope that when they grow older they will also treat their girlfriends and wives the same,” he added.

He also wished for his daughter to know “how her mother was treated and hopefully she will not settle for anything less in life.”

He continued further, “Appreciate the small things in life because at the end of the day it doesn’t matter what car you drive or how big your house is.”

“All that matters is the love that you share within that house. When you lay in bed at night you’ll sleep much better knowing you loved with all you have.”