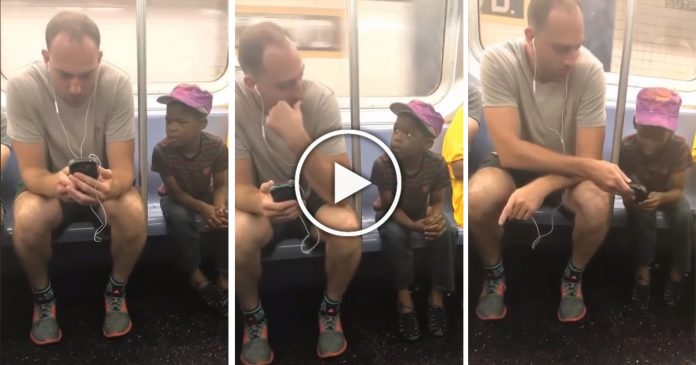 Never underestimate small act of kindness that can change someone’s life and made a long-lasting impression for others.

In the video that has made rounds on social media, a little boy can be seen overlooking a man who sat next to him.

The man was playing games and had his ears plugged with earbuds. He did not notice the boy in the first place.

He is clearly into his game.

However, just a little moment later, the man finally notices that the young boy who has been staring curiously at his phone’s screen. The video later shows the man turning his head to see the child.

The boy felt guilty when he was caught staring at the stranger’s phone.

The man, however, turns back at his phone screen and continues playing his game after the awkward moment. Meanwhile, the boy continued to watch him play the game.

Needless to say, something happens later that brings the boy to a huge surprise.

The man later removes his earbuds and gives the phone to the boy so that he can play as well.

It was so apparent that the boy was beyond excited when the man handed his phone to him!

Luckily, the heartwarming moment was caught on a camera and since it was first posted on YouTube, it has touched thousands of viewers’ heart.

User Phoenix Chastain wrote, “What a sweet kid! He’s so curious but look at his posture. So much self-control for just a little guy! D’awww And way to go to the man who gave him a chance to play too. Very cool!”

Meanwhile, user, Amy Bowers wrote, “What a sweet hearted man… And that child…my heartfelt something really good watching this. My day was a real bummer until I watched this.”

To many people, the man’s action may be insignificant but to the little boy, it meant a lot to him!

Watch the full video of the heartwarming moment here

A Mother in North Carolina Gives Birth to Her 16th Baby...