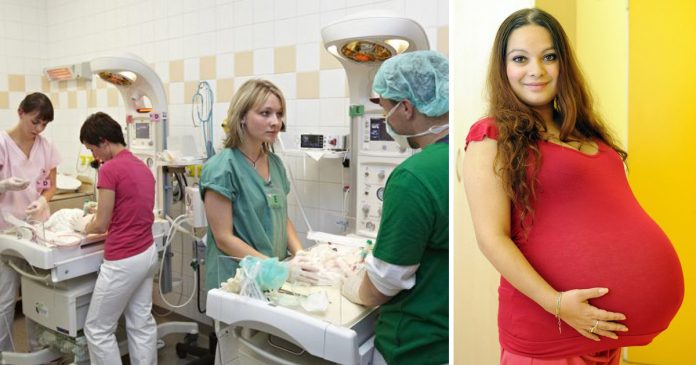 The 23-year-old Alexandra Kinova and her husband Antonin Kroscen from the Czech Republic are looking forward to meeting their twins when they received the most unexpected news.

“When we finally found a fifth head, I started to cry,” said Kinova.

After nine months of pregnancy, this Czech lady finally gave birth by Caesarean section to four sons and a daughter—as told by the officials at Prague’s Institute for the Care of Mother and Child.

The mother and her five babies have been placed in an intensive care unit and thankfully the birth took place without any complications.

The staff at the hospital looking out for the babies.

The four boys were named Deniel, Michael, Alex and Martin while the only girl will be called Terezka.

Zbynek Stranak, chief doctor at the neonatal section of the institute said that the babies have 95 percent chance of growing up healthy. By this, Kinova defied the odds of 50 million to one to conceive five babies without IVF and the first one to give birth to quintuplets in the country!

Kinova said that aside from four months of morning sickness, she has been able to sleep on her side and has not had any problems with her breathing. Kinova planned to breastfeed all her babies just like she did to her eldest son.