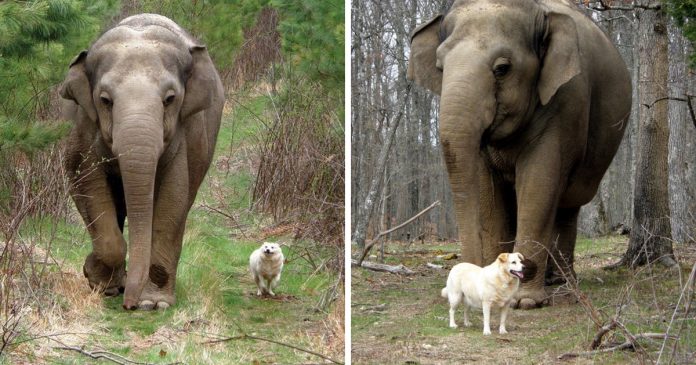 Tarra the elephant and Bella the dog had been best friends for eight years and they thought that their friendship would last at least for another decade. Unfortunately, Bella left the world first.

According to CBS, Tarra and Bella began to strike a friendship when they first met at The Elephant Sanctuary in Tennessee eight years ago.

The two later instantly formed a close bond with each other.

Despite coming from different species and sizes, Tarra and Bella always spent their time in each other’s company.

The elephant and the dog often ate, played and slept together in a barn.

Tarra and Bella were very close that once, when Bella got injured a few years ago and had to recuperate in the sanctuary office, Tarra just stood patiently in a corner waiting for Bella to return.

Unfortunately, Bella was allegedly attacked by coyotes, leaving her severely injured. She later passed away.

According to the sanctuary caretakers, Tarra was the one who found the remains of Bella after the attack occurred and carried her corpse to the spot where they often played together.

They never know whether Tarra did have time to intervene during the attack or she was just too late.

“The idea that she couldn’t leave that body and brought it back home is just heartbreaking, but so inspiring,” Robert Atkinson, CEO of the Elephant Sanctuary, told WKRN News 2.

“She became more reserved, quieter, she was depressed, he said.

Fortunately, other elephants in the sanctuary stepped in to offer comfort and sympathy to Tarra for her loss.

“There’s nothing we can do to take away her pain,” said Atkinson. “The only ones who can help now are the elephants. And that is already happening.”

Watch the video of Tarra and Bella here:

A Newborn Baby Elephant is Attacked by Its Mother and is...