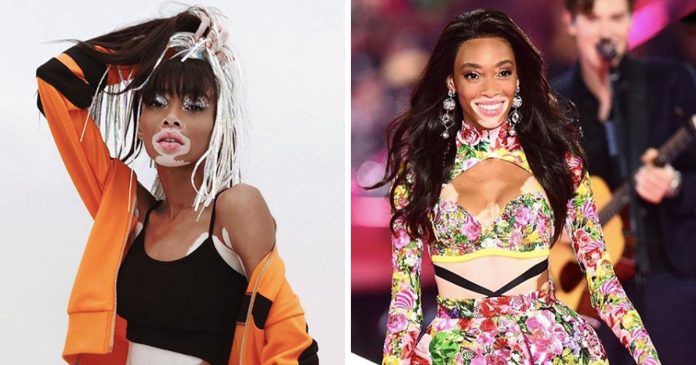 World renowned supermodel Winnie Harlow, who suffers from vitiligo, has taught us all to love ourselves for who we truly are, and we’re here for it.

The 24-year-old from Canada, who has made a name for herself in the fashion industry, says she found her confidence by practicing self-love.

Winnie has evolved tremendously as an activist, spokeswoman, supermodel, and has confidence and body image issues since she was young.

Vitiligo is a skin condition which causes the skin to lose pigment, causing blotchiness and an uneven skin tone.

In the past, she was even bullied and called a “zebra” and “cow”.

But now, it’s these unique qualities that she chooses to highlight.

She was scouted by America’s Next Top Model host Tyra Banks on Instagram, and has since worked with brands such as Swarovski and Desigual.

Winnie even made her debut as a Victoria’s Secret Angel last November alongside the likes of Gigi Hadid, and Leomie Anderson.

Her fans love her for embracing who she is, and say she has given them confidence too!

One said, “As a psoriasis warrior, I thank you for all you do to make us other exotic creatures shine!”

“This woman literally inspires me so much that I can’t even say. Even I have got vitiligo but it’s only on my legs and I was so conscious about them but after seeing her I absolutely love myself and she has given me so much confidence,” another said.