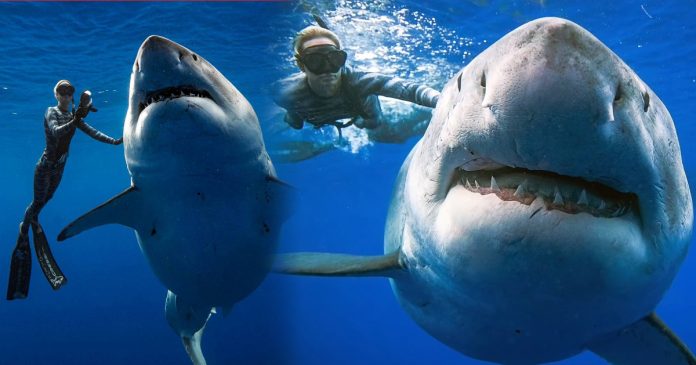 Sharks are always portrayed as a dangerous creature with their set of horrendously scary-looking sharp teeth. But these divers had an extremely rare experience as they swam with the largest great white shark in waters off in Hawaii.

Terrifying but amazing at the same time, the female white shark is about 7 meters (23 ft.) long with the weight of 2.5 tons—believed to be the largest white shark ever filmed.

Even when the marine pollution and hunting affected the life span of the sea animals, this white shark managed to live its life up to 50 years.

White sharks tend to avoid Hawaii as they prefer colder water, but its presence in Hawaii waters that day was unusual. Named as ‘Deep Blue’, the humongous white shark first appeared in the Discovery TV series—Shark Week in 2014. The shark went viral the next year after it was filmed in the waters near Mexico.

Deep Blue’s appearance excites the marine experts and divers as they recognize the unique scars on the big fish.

Ocean Ramsey, a marine biologist and shark activist who started One Ocean Diving stated that she had heard that a group of sharks had gathered around a sperm whale carcass to feed.

Shark is following whale carcass being towed from the shoreline.

One Ocean Diving team later headed to see the sharks gathered around the whale carcass and that’s when Deep Blue brushed again their boat-probably just introducing itself.

Ramsey speculated that Deep Blue might also rub up on the boat as it was itching its pregnant-looking belly.

The divers swam with the large white shark.

They even touched the ‘wide’ shark!

Watch diver touched the shark in this video:

“I waited quietly, patiently, observing as she swam up to the dead sperm whale carcass and then slowly to me passing close enough I gently put my hand out to maintain a small space so her girth could pass,” recalled Ramsey on her experience touching the whale.

“I know some people criticize touch but what some don’t realize is that sometimes sharks seek touch, she swam away escorted by two rough-toothed dolphins who danced around her over to one of my One Ocean Diving shark research vessels and proceeded to use it as a scratching post, passing up feeding for another need.”

Ramsey who advocates for shark conservation writes that sharks have a bad reputation because of how the mass media negatively and inaccurately portrayed. She contends that humans are the great killers as ten of thousands of sharks are killed every year for shark fin soup.

‘I hope my conservation images like this help people to question their perceptions and realize the beauty, and importance of sharks and I hope that they inspire the kind of compassion and connection we need to have with nature and sharks, to help protect them and coexist alongside them.’

However, some marine biologist criticized Ramsey and her crew for touching the white shark.

“Posting selfies with white sharks is really the wrong message. These are very dangerous animals. Yes, in this case, they were very satiated and unlikely to bite, but the average person should not be hopping in the water with them,” said Michael Domeier, a marine biologist that started a nonprofit focused on using research to help marine life.

Average human shouldn’t definitely be hopping in water with this one!

Domeier also insisted that it was unethical to ride white sharks. According to Domeier, Deep Blue has been named Haole Girl by the diver that first reported the gigantic white shark to them.

Watch the divers swam with the shark here:

Looking at the white shark this close is fascinating!