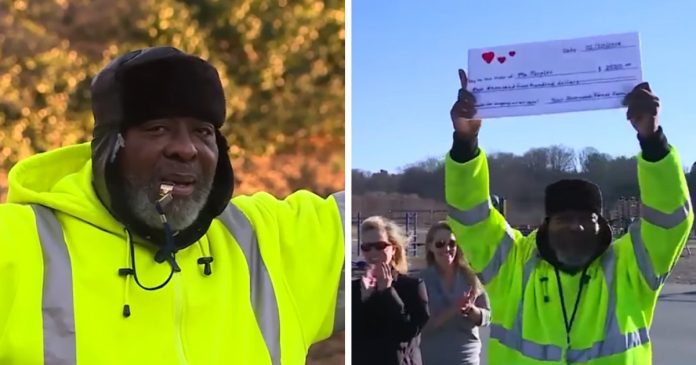 Sometimes, a hero wears a bright neon vest like Mr. Wallace Peoples who gives his best to make sure every student at Sherwood Forest Elementary School can cross the road safely.

62-year-old Mr. Peoples has been working as a crossing guard at the elementary school and his main duty is to help the students cross the road safely.

“They are my kids,” of the kids which he helps safely cross the street each day,” Mr. Peoples said. “I take it very seriously, safety.”

His sincerity in guarding every student’s safety is very much appreciated by the parents. “He’s looking out for everyone. The kids, the parents. He doesn’t miss a beat,” a parent commented.

Apparently, he is much loved by the students as well. Student Isabel Assouline said, “He’s just extraordinary. He helps all of us and keeps us safe, and we all love him.”

Since Mr. Peoples plays a significant role in making sure that the students are safe, everyone felt his absence when Mr. Peoples could not go to work last December when his car broke down.

On top of that, he even had to spend Christmas Eve in the hospital. Luckily for Mr. Peoples, he did not have to go through the rough time all by himself.

When one of the students’ parents, Sloane Johnson learned about Mr. Peoples’ story, she wrote a post on Facebook to raise some money for him.

Soon after she posted on Facebook, donations came pouring in. “Within a span of two hours, we had $800 raised and a car donated by another parent,” she said during the interview.

Later, Mr. Peoples who was not aware of the fundraising was told to go to Sherwood Forest Elementary School in a borrowed ride. He was under the impression that he had to work out a deal to purchase an old beater.

Little did he know that a huge crowd of students and parents already waited for him to present him a new SUV and a check of $2500!

He had always been passionate and sincere about doing his job so he never expected anything in return.

Needless to say, he was grateful for the love and care he received from the students and the parents.

“Now I know they care,” he said. “It’s good to know that people care.”

Thanks to the new SUV, Mr. Peoples now no longer has any problem to go to work!

A veteran struggled to pay for his goods when his card...