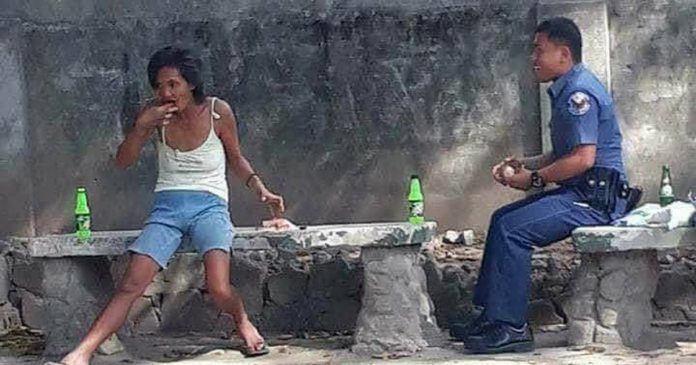 Some people usually avoid getting close to a disheveled homeless person, but this considerate cop is one of a kind. We will never know when someone had a bad day, but one kind act like this one will definitely make someone’s day.

In this photo shared by a Facebook account, this police officer in the Philippines was seen enjoying his lunch break with a snack and some refreshment—nothing unusual. But when another snapshot shared by a pedestrian was uploaded, the police officer was actually sitting with a disabled homeless woman.

The police officer was having some snacks during his meal break.

He bought the homeless woman a burger and a drink, and they were seen enjoying their lunch together. Unbothered by her unkempt outer appearance, the police officer happily chatting to the homeless woman—even when she seemed unable to respond.

It turned out that the kind police officer was sitting for lunch with a disabled homeless woman.

The police officer’s kind gesture in taking time to be with another human being who needed interaction touches the hearts of many people on social media as there are not many who’s willing to do the things that he did.

We need more people like him in this world!

This graduate’s life ends with a tragic death. After further investigation,...