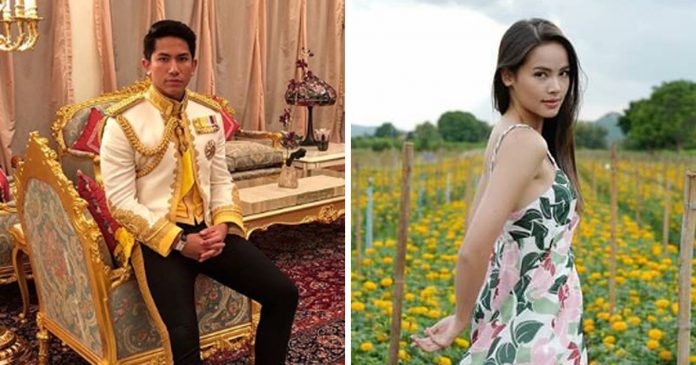 Famous for his charming looks and amazing figure, Prince Mateen of Brunei might not look like any Hollywood star, but we definitely can’t deny his star potential. With 1 million followers on Instagram, Prince Mateen’s every move is observed by many. By every move, that includes who he followed on his social media account as well!

Recently, Prince Mateen followed one woman on Instagram and people are eager to know who is this lucky girl who catches the eyes of the prince.

Urassaya Sperbund or mostly known as Yaya is a famous Thai actress and model. Fluent in Thai, English and Norwegian, this half Thai and half Norwegian descent actress is widely known for her hit television series The Crown Princess.

Yaya is a famous Thai actress.

In the television series The Crown Princess, Yaya played the character Princess Alice of Hrysos. When her life was put in danger after her coronation, Princess Alice was sent to Thailand—where she met her handsome bodyguard, Lieutenant Commander Dawin Samuthyakorn.

The princess was visited by many other princes, but she refused as she has fallen in love with Lieutenant Commander Dawin—played by the Thai actor Nadech Kugimiya.

Yaya’s role as Princess Alice and together with her bodyguard.

Not only in the series, but Yaya’s heart also belongs to Nadech in real life too.

Nadech is Yaya’s boyfriend outside of the television series.

They enjoyed spending time with each other.

As Yaya successfully played her character as a princess, could it be that her poise and regal appearance has attracted Prince Mateen?

The prince in his plane.

With a father who has an estimated net worth of USD 20 billion, the prince is not shy to show off his lavish lifestyle on social media.

Just cruising along the Mediterranean Sea.

Not only super rich, Prince Mateen graduated with a master’s degree in International Studies and Diplomacy from The School of Oriental and African Studies, University of London.

In July 2016, the prince was qualified as a helicopter pilot in Defence Helicopter Flying School at RAF Shawbury, in which his father the Sultan of Brunei awarded him a RAF Wing Badge.

And brace yourself, he also knows how to play the guitar!

And maybe we can say a bit of cooking too!

With a guy this perfect taking interest on Yaya, we feel that Nadech shouldn’t let his guard down!