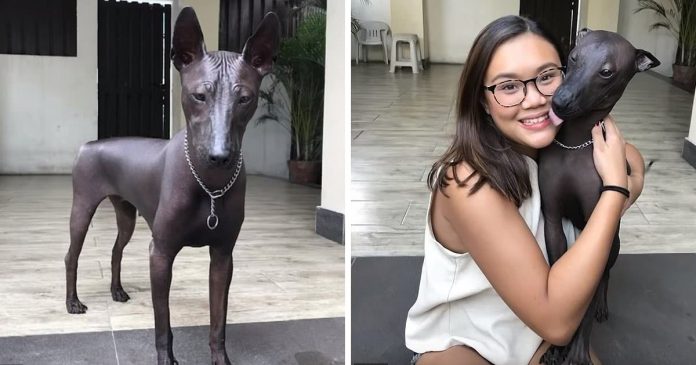 A photo of a rare Mexican hairless dog has confused thousands of internet users around the world because they can’t decide if it’s a statue or not.

The pooch’s owner, 22-year-old Sandra Pineda from the Philippines, is flattered so many think her pet, Piper, is a work of art.

She also finds it hilarious that the internet thinks her one-year-old dog is a sculpture.

Sandra adopted Piper and brought her home last March, when she was just two-months-old.

The viral canine is a Xoloitzcuintle—or Xolo for short—which is found in toy, miniature and standard sizes, and is known for being hairless.

The rare breed is most notable for its large, upright bat-like ears, and they can change colors as they grow older.

Piper’s dark and metallic color makes her look just like a shiny statue!

Many internet users ended up praising the sculptor’s skill, until they discovered she is a real dog.

What’s her secret? Sandra says that she lathers Piper in virgin coconut oil to make her skin super glowy!

Do you think Piper looks like a statue? Let us know in the comments.