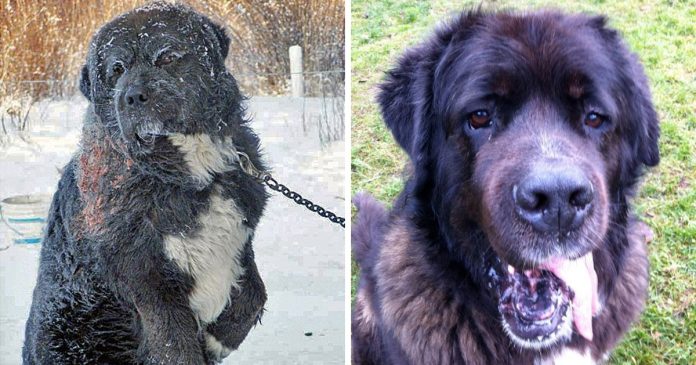 This poor dog was isolated, abused and kept in chains outside in minus 40 degrees in Yukon, Canada for four years. But one day, rescue angels came to save him and find him his loving forever home.

Diesel never expected his owner would abandon and mistreat him.

But sadly, he was left to fend for himself in the freezing cold—he had lost all hope.

He was defenseless against attacks from other animals.

Poor Diesel was kicked in the head by a horse, which made him split his tongue and lose his teeth.

But one day, a guardian angel got in touch with Animal Advocates Society to tell them about Diesel’s sad story.

When Diesel’s rescuers came to save him, he was even covered in blood from defending himself against an attacking dog!

They immediately took the pooch away from his unloving owner and flew him to Vancouver.

Once he arrived, it was time to get his health in check! Diesel was neutered, had seven teeth extracted and a benign tumor removed.

He was also given behavior and emotional rehabilitation to prepare him for being cared for in a loving home.

Sadly, Diesel passed away peacefully in his sleep in 2014 from cancer, but it’s safe to say he lived a life full of love and comfort, thanks to his rescuers at Animal Advocates.

We’re glad he lived his final years loved and cared for.