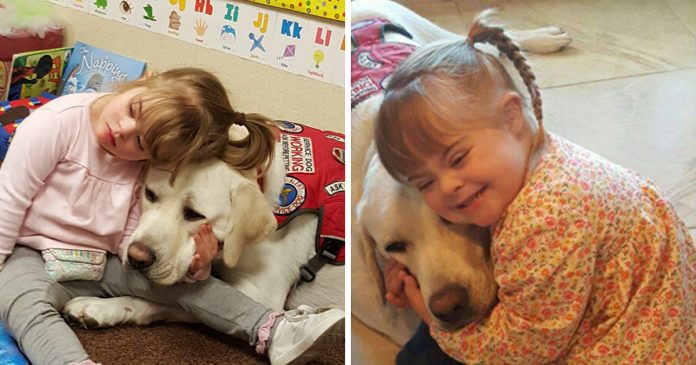 Hero, a trained diabetic service dog has been dubbed a guardian angel after he saved a five-year-old girl’s life—he sensed she was in danger even 5 miles away!

Sadie Brooks suffers from Down syndrome and Type 1 diabetes, which means it’s really hard for her parents to tell if her blood sugar levels are low.

So Hero is given the most important task of all—to alert Sadie’s parents if her blood sugar drops too low or too high!

The sweet Labrador has stuck by Sadie’s side throughout her struggles, and keeps her safe every single day.

He’s the best companion ever!

They do everything together.

“I’ll hold out my hands and say, what is it? and he’ll paw for, paw my left hand for a low, and he’ll nose my right hand for a high,” Sadie’s mom Michelle told KUTV.

“The lows are more dangerous immediately,” she explained. “[With] lows, she could go into a diabetic coma right away, and she could die, if we kept her low too long.”

But one day, something amazing happened.

When Sadie was at Deerfield Elementary School in Cedar Hills one day, Hero started to cry and whine, which alerted Michelle.

The pair were over 5 miles apart from each other!

“He’s normally a very quiet dog. Whining is not in his protocol. But he just started whining and he would not stop,” she said.

Sadie’s mom started to worry so she called the school to make sure her daughter was okay.

And Sadie’s teacher, Ms. Kimberley Stoneman, was shocked to find that Sadie’s blood sugar levels had dropped dangerously low—from 122 to 82!

While training dogs have a special ability for scents, Hero’s trainer, Owens, said she couldn’t explain how the pooch could sense Sadie was in danger from 5 miles away!

“I can’t explain it. I think it’s like mother’s intuition. These dogs have abilities and senses beyond our understanding.”

“I’ve always called Sadie our little angel, and I think Hero was a little angel sent into our lives to watch over her,” Sadie’s dad added.