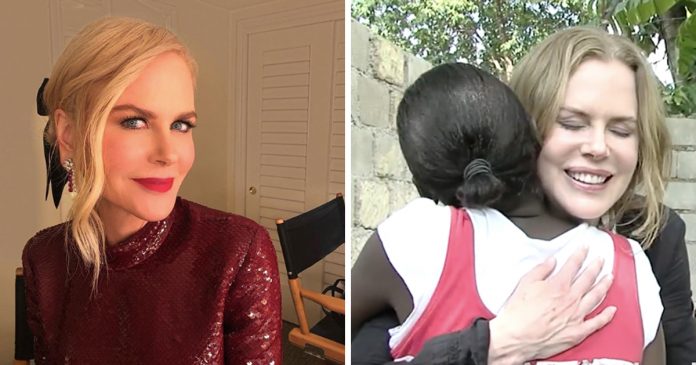 Aquaman actress, Nicole Kidman, honoured her father’s memory on Human Rights Day by pledging a huge sum of money to a charity which supports abused women.

The Academy Award-winning actress, 51, made the generous donation to charity on her late father’s birthday, who would have been 80, she said in a sweet Instagram post.

The 51-year-old announced she was donating the huge sum to the United Nations Trust Fund to End Violence Against Women, at a UN luncheon.

“Yet through the UN Trust Fund, I’ve seen them overcome their pain and regain their courage to look towards the future,” she said during her moving speech.

“I’m here today to continue this work and amplify the voices of women survivors through the media and help raise significant funds for programs that address this issue,”

The Australian actress posted a picture on Instagram in memory of her late father who passed away in September 2014.

“Today would have been my Papa’s 80th Birthday. Miss you Papa, love you so much,” she captioned the photo.

“My papa was such an advocate for human rights,” she added in an Instagram story.

Nicole has dedicated over a decade of her life raising awareness on the women’s human rights around the world, since she was appointed Goodwill Ambassador in 2006.

She is particularly passionate about raising awareness about violence against women, which affects up to one in every three women.

“Working with UN Women, I have met women who had to overcome enormous obstacles, yet who went on to help others and organize to achieve social change.

She is even instilling her selfless and kind traits in her family, and said her family gives to their favorite organizations rather than buying gifts for each other at Christmas.