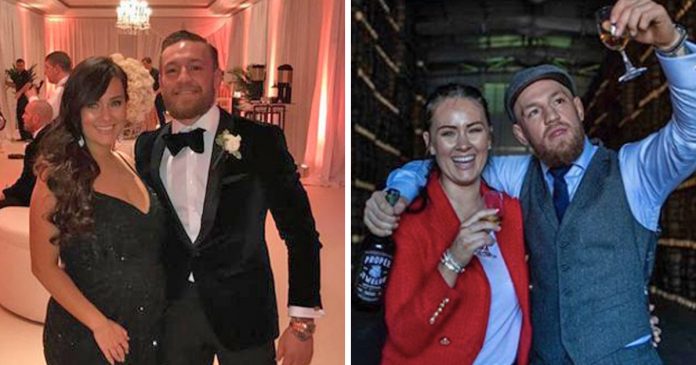 Irish UFC champion Conor McGregor fought to fame in 2013, but his long-term partner Dee Devlin has stuck by his side since back in the day, when they had nothing.

And now the pair are one of Ireland’s best-loved and well-known couples, and are rarely seen apart!

Dee and Crumlin-born Conor, 30, met over a decade ago in 2008, when the Irish fighter was just a 19-year-old with huge dreams.

He had just quit his plumbing apprenticeship to pursue his goals of becoming a champion MMA fighter.

The couple met in a nightclub, and that’s where their love story first kicked off. Aww!

“I asked her to come over and we just started chatting. She seemed like a nice girl, and I like good girls,” the UFC featherweight and lightweight champion told VIP magazine.

Fast forward to today, the adorable couple have a baby boy named Conor Jack, and are eagerly awaiting the arrival of their second child!

Their sweet son clearly takes after his daddy—he’s a little fighter that’s for sure!

“He’s very funny – he always keeps me entertained and makes me laugh,” she said. What she loves the most about him is his dedication to his martial arts training, and has been supporting him since day one.

“He was already training when I met him, so I really admired his dedication to that,” Dee said.

The one thing which keeps Conor going is his future life ahead with Dee!

“I’m doing this to secure my family’s future and Dee’s future. One day, I want myself and Dee to be able to chill on a beach and not have any worry in the world,”

Hard work clearly pays off, now the couple don’t have any financial worries!

“She has helped me throughout this career. If it wasn’t for her, I probably wouldn’t be where I am today,” he told MMAFighting.

“My girlfriend worked very hard throughout the years and stuck by me when I had essentially absolutely nothing. I only had a dream that I was telling her.

“For me to be able to take her out of work, give her everything she’s ever wanted and to travel the world with her fills me with pride.

“It keeps me going. We’ve been together a long time. She’s been through it all with me,” Conor added.

Dwayne Johnson shares sweet photos of 17-yo daughter as she graduates...