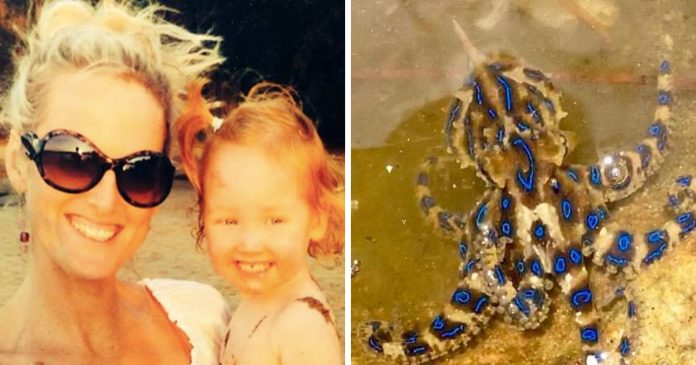 A mom from Australia got the scare of her life when her 11-year-old daughter walked out of Sydney beach holding a deadly octopus which she scooped up in a shell—she later found out her daughter almost could’ve died!

Julie Tattam took to Facebook to describe the terrifying, “super scary” moment to warn others against doing the same.

Her daughter was having a swim at Salmon Haul beach in southern Sydney when she noticed the peculiar sea creature.

“Look at this gorgeous octopus, I caught it in this shell,” she told her mom excitedly.

The little girl wasn’t aware that the octopus was venomous and one of the deadliest sea creatures in the world!

Julie was alarmed when she noticed the strange blue markings and immediately began to google what it could be.

“She walked all the way up the beach to show us and the octopus started crawling out of the shell towards her hand so she dropped it onto the rocks,” Julie posted on Facebook.

“I ran down to look and it was a blue-ringed octopus! She had been carrying it in her hands (luckily with the shell to protect her).

“I was so worried (in fact I am still shaking with ‘what ifs’) so I Googled them.”

After a quick search, the worried mom discovered that its sting can cause numbness, paralysis, difficulty breathing, and if left untreated for even 10 minutes—death.

The creatures are usually found in coral reefs and tide pools in the Indian and Pacific oceans, from Australia to Japan, and its blue markings appear when they are angry or excited.

Julie was so thankful her daughter hadn’t been bitten or stung, because they were too far from the closest hospital.

She continued, “We were a good 15 minutes walk from the car and then about 15 to 20 minutes drive from the hospital. So scary!”

Julie said she wanted to warn other parents against letting their kids touch the sea creatures.

“I didn’t realize they were so little – they are tiny like only five to seven centimeters long, and we had never thought to show the kids a photo of one,” she wrote.

Be careful next time you’re at the beach, and don’t touch anything without doing your research first!

Nanny is babysitting boy and senses they’re not alone. Then dad...