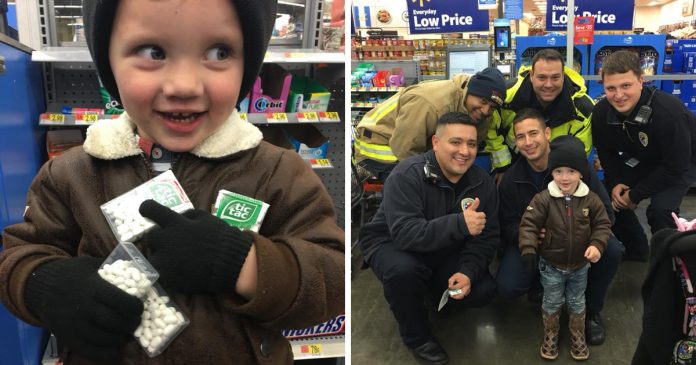 As a mother of two, Summer Aldrige knew well on how to teach her son Dawson to behave when they are in a public, especially when she has errands to complete before Christmas. The mother offered to buy Dawson a treat if he behaved well.

However, she never thought that her son would use the treat to do good to others.

Aldrige took her son Dawson to a local Walmart in Rosenberg, Texas as she had to do some shopping for Christmas.

As usual, she told Dawson that she would let him have his treat if he behaved well. She thought that Dawson would definitely want a small toy or a bag of candies and that he would try his best to be on his behavior.

So, when she saw that Dawson was indeed behaving well, she let him bought a treat with $5 and told him to pick something.

When she saw the little boy walked towards the candy aisle, she was not surprised at all but as soon as Dawson returned, she was surprised to see that he picked five Tic Tac candies.

Tic Tac was never Dawson’s preference when it comes to sweet treats.

It turned out that he wanted to buy the Tic Tac candies for the firefighters who were standing a short distance away from them.

Later, the boy gave the firefighters the Tic Tac and each of them gave him a hug and thanked him.

One of them later asked Dawson what he wanted for Christmas and the boy told him that he wanted to be a firefighter. Surprisingly, the boy was later invited to take a tour at Richmon Fire Department!

They even let Dawson experience how it felt like to be a firefighter for a day. It must have been the best day of his life.

Y’all don’t know how happy my heart is. The joy in my child’s face when he was taken around the station and taught to…

Aldrige wrote on her Facebook that it was great to see Dawson having the chance to get his dream came true but the real gift was that she knew that she had raised him right.

I officially 150% have the sweetest, most loving, sweet boy around. This happened as Dawson and I were at Walmart…

Watch the full video of Dawson riding a firetruck here