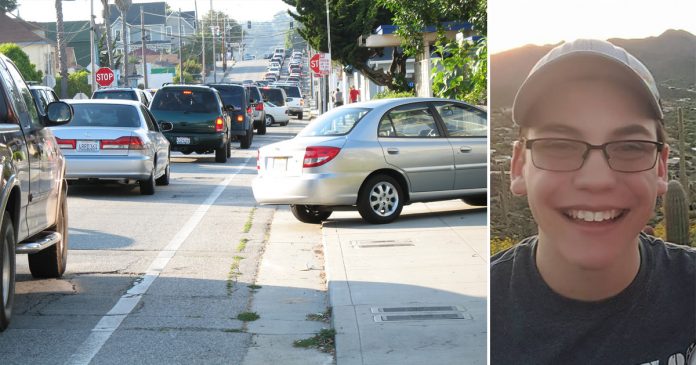 It’s hard not to get annoyed when some random car suddenly stopped and blocked everybody’s path.

But when all other people were irritated about what actually happened, this sensible 16-year-old, Max Greenwood driver noticed something was wrong and stopped to help the car owner.

Greenwood was just driving his truck when he noticed a driver parked at a stop sign and seemingly in distress. He looked around and realized other drivers were annoyed that their path was blocked and completely unaware that the driver needed help. Instead of honking and maneuvering the car like other drivers, Greenwood jumped out of his truck and assist the man.

He decided that he’s not going to just watch that happen.

“A few people were honking and a couple of people passed him because they were frustrated he was stopped. I didn’t want to just honk and be a dirtbag like that,” told Greenwood to KREM News.

Greenwood’s action initiated two other women to rush over and help the stopped car. They are not sure what had happened to the man but he finally mustered his strength and told them that his blood sugar was low.

“He told the women he thought his blood sugar was low. He got progressively worse. One of the women gave him a Coke to help his sugar levels, but I could tell it wasn’t helping, so I called 911,” recalled Greenwood about the incident.

Without his help, the man’s blood sugar level would’ve gone to a dangerous level.

Help arrived a few minutes later and transported the guy to the hospital. First responders recognized that the man was suffering from some type of medical complications, fortunately, Greenwood was there to help him right away!

“It’s a person. If I was in his situation, I would want someone to help me. I stopped because I always try and make an effort to help people on the side of the road,” told Greenwood on why he stepped in to help a complete stranger.

Greenwood’s mother, Mary Pudelko shared how proud she was of her son with KREM News.

“You preach to your kids that you need to do the right thing, and when he did I was really proud. In this day and age, when a lot of kids don’t think about anyone but themselves, he stepped up and it made a difference.”

Greenwood and his mother.

We should all be more attentive to our surrounding and help make the world a better place.