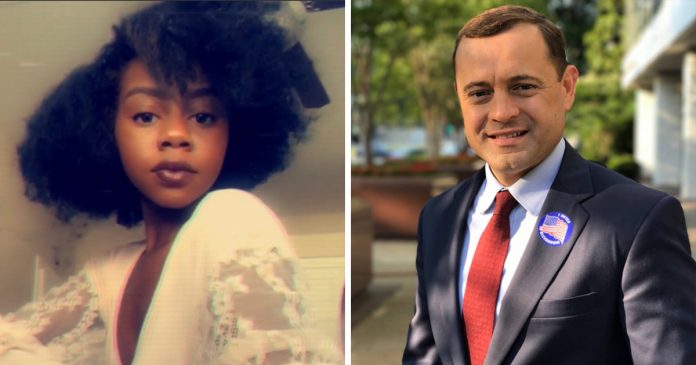 No mother would ever leave her daughter in the hands of a stranger unless she is really desperate. This is exactly what happened when Maya Hughes who was then 5-year-old was entrusted to a stranger by her mother, Zee Sesay 15 years ago due to medical complication.

Hughes who is now 20-year-old took to Twitter her experience when a complete stranger was willing to help her back in 2003.

At that time her mother, Sesay was not able to find anyone else from the airport to help her out during an emergency situation. Fortunately, she found a kind stranger to her rescue.

Mom Sesay was forever thankful to that mystery man for helping her daughter and it was not only after 15 years later that she finally found him.

She pointed her in the direction of the “whet man na corner” (white man in the corner for the afros” and he told my mom he was in no mental state to travel with a minor because he had just lost his grandmother . My mom didn’t know this man at all whatsoever

“He agreed to bring me—a screaming, crying 5-year-old he had only met 2 seconds ago to America.”

Without his name or any single info, Hughes later explained that her mother successfully tracked down the mystery man through a family member who works for the man.

My mom has been trying to find this man for 15 years , we never got his name or anything . So like a week ago my mom found him through a family member who actually worked with him and she said he matched the description and everything

Hughes shared on her Twitter that the mystery man turned out to be a former Virginia Congressman, Tom Perriello!

And he ran for governor of Virginia in 2017 y’all his name is @tomperriello I know this is a long ass thread and may not seem like much to many but there’s a HUGE possibility I wouldn’t be here today if this man didn’t bring me back over here .

The former congressman, Perriello and his mother.

Mom & I headed to Southside to help #ReclaimThe5th.
See you in Chatham (2pm), Henry/Martinsville (5pm) & Danville (7pm) with @TeamCockburn! pic.twitter.com/g8M46iSOog

Hughes amazing experience has since gone viral on social media and reached Perriello as well! The former congressman confirmed the incident and expressed his happiness when he found out that Hughes is all grown-up as one bright girl.

One of the craziest experiences of my entire life is now a Twitter thread – and I could not be happier to know you are shining bright, @_themayan_ ! https://t.co/Sk2kWv2RhH

Mom & I headed to Southside to help #ReclaimThe5th.
See you in Chatham (2pm), Henry/Martinsville (5pm) & Danville (7pm) with @TeamCockburn! pic.twitter.com/g8M46iSOog

Such an amazing encounter!

A young schoolboy did not have enough money to pay the...