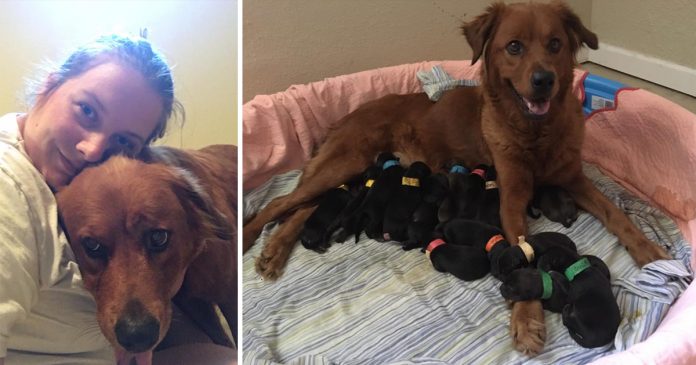 Some canine needed to be euthanized when they no longer have chances to live like other healthy dogs. But this kindhearted lady, Ashlee Holland couldn’t stand the thought that the poor dog, Ava will get euthanized so she decided to give it a second chance of life.

Holland believes that death is not the only the way to these animals. When she saw a pregnant golden retriever-chow mix was on the list to be euthanized, she had this urge to rescue the dog and save it.

“I was aware she was having puppies but the x-rays didn’t show how many.”

As a mother herself, Holland must have understood how Ava felt and she always had a passion for saving pets.

“She was on the euthanasia list. She had no choice, no other hope. I was basically her last resort with Midwest Animal ResQ. No dog deserved to be put to sleep for space,” told Holland to Fox4 News.

Holland made the right choice for rescuing Ava.

Without much hesitation, Holland brought the poor dog to her home and it surprises her with the biggest gift ever. Not big in size, but big in numbers! Just two weeks after she brought Ava home, the dog gave birth to not eight but 18 lovely puppies! It can’t get happier than this for Holland.

“It’s heaven. Puppy pile, you can’t get any better than that.”

They’re so cute together!

Having a lot of puppies is quite a problem when it comes to naming them. But Holland’s 9-year-old son just had the perfect solution.

He named each puppy after some of the Kansas City Royals!

Not getting out of bed today!