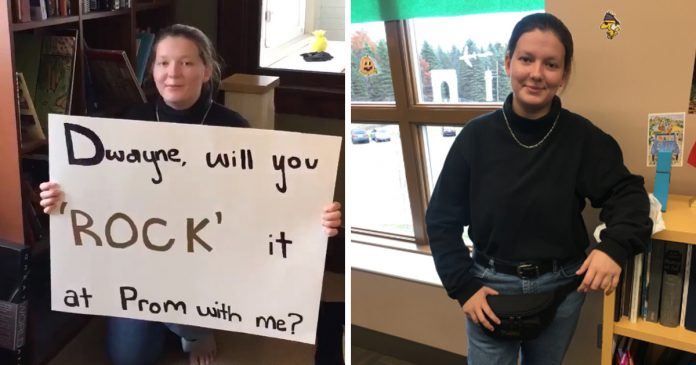 Ever thought about asking your favorite star to prom with you? This girl from Stillwater Area High School in Minnesota might be the luckiest superfan ever when her video to ask her favorite actor Dwayne ‘The Rock’ Johnson to be her prom partner got the attention of the Rampage star himself!

It all started when Katie Kelzenberg filmed a ‘promposal’ video of her inviting Johnson to her upcoming senior prom and uploaded it on Twitter. Dressed as Dwayne Johnson with her Dwayne Johnson merch collection laying beside her, Kelzenberg took her courage and hold up a paper.

“Dwayne, will you rock it at prom with me?”

This cute girl also tried to appeal to Johnson with reasons he should attend the prom with her.

She proudly dressed as her favorite star for Halloween.

That post eventually made into Johnson’s Twitter and being a nice person that he is, he responded. Well, not in our usual boring way—because he’s The Rock. He sent her a message over the school’s intercom and told her that while he was disappointed that he couldn’t make it to her prom, he was going to try to make it up to her.

Kelzenberg was shocked listening to The Rock talking over the school’s intercom.

“Katie, because we are now best friends, and I have so much love for you because you’re so awesome. I have a very special gift—I have rented out a theatre tomorrow, which I believe is very close to you. I want you to grab all of your favorite friends and your closest family members, whoever you wanna bring Katie.”

“I’m showing you a screening of my new movie Rampage and all of the popcorn and candy and soda you want, it’s all on me. Everything is free. I want you to go have the greatest time. I rented out 232 seats. So Katie, have the best time. Thank you for being awesome!”

You can watch the full video here:

So Katie went to the movie with tons of her friends and enjoying their time at the movie as you can also see in Johnson’s Instagram.

Such a lucky fangirl!