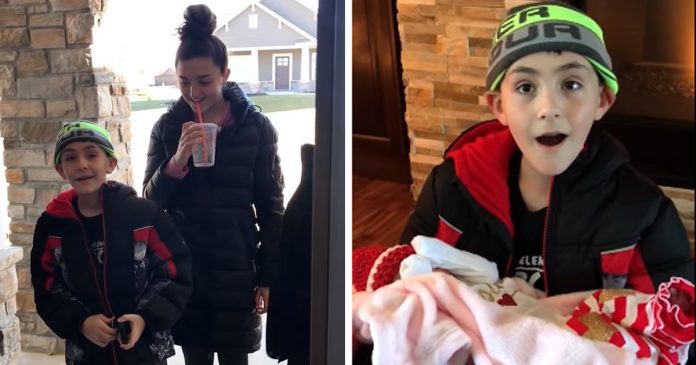 If you’ve been good this year, all you do is just patiently wait for your gift under the Christmas tree. But the gift that this 10-year-old Owynn added to his Christmas list to Santa is quite special and not easy to get.

Besides writing down his wishlist, Owynn has also been asking his parents to get him a sibling. Owynn’s mother Stacey grew up in a big family of 14 siblings so she felt that it is important that her son grow up in a similar experience. Stacey and her husband, Adam have always wanted two children at least.

Owynn has been pleading his parents for a little sibling.

So they’ve been trying really hard for seven long years to no avail. After five heartbreaking miscarriages and a failed in-vitro, Stacey and Adam decided to try becoming foster parents. The couple took an introduction to foster care class but realized it would be hard to let go of the child when the time comes.

This is when they met Kendra, a young woman who wanted to place her baby girl for adoption at birth. Stacey and Adam couldn’t be happier but decided to keep the good news from Owynn worrying that Kendra might change her mind later.

On December 6, Kendra gave birth to a healthy beautiful daughter named Naylee and gave the couple permission to take the baby home. This is the exciting moment when they prepare to surprise Owynn with his newborn sister he always wanted.

They waited for Owynn to come home and break to him about his very special early Christmas gift. Owynn who wasn’t expecting anything seems like he’s holding his tears when he first found out about his precious gift—a baby sister!

With a cute little sister wrapped in warm blankets under the Christmas tree, we can say that Owynn must have been a very good boy this year to got his wish granted!

Owynn seemed excited to meet his little sister and wished that she’ll greet him with open eyes when he asked why is the baby sleeping.

Owynn who looked like he’s holding his tears all the time after seeing his new family.

Congratulations on being a big brother, Owynn!