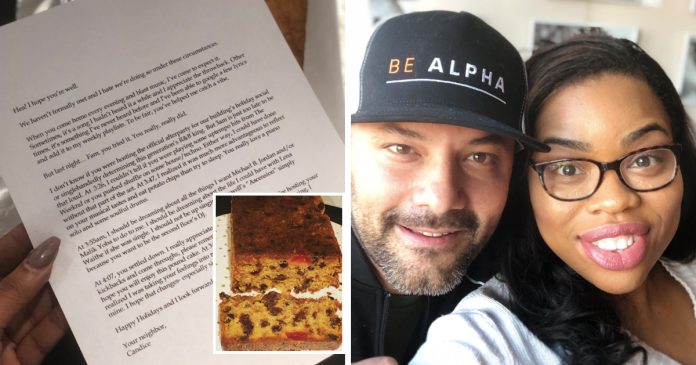 When a noisy neighbor kept blasting music until 4 in the morning, this woman came up with the most brilliant way to address the problem.

Instead of getting mad at her neighbor, writer Candice Marie Benbow chose to take a gentle approach. She wrote him a sweet letter and baked him a cake.

She shared a photo of her letter and cake on Twitter, and the internet is praising her graceful act.

“We haven’t formally met and I hate we’re doing so under these circumstances,” the letter starts.

She told her neighbor that she has come to expect him to blast music every evening and that at times she appreciates a “throwback” to a song she hasn’t heard in a while.

“To be fair, you’ve helped me catch a vibe,” the letter continues.

But her letter soon takes a more serious but still light-hearted turn. “Last night … Fam, you tried it. You really, really did,” Candice wrote.

“At 3:26, I couldn’t tell if you were playing some uptempo hits from The Weekend or you pushed shuffle on some house/techno. Either way, I could’ve done without that part of the set.

“At 3:47 I decided it was much more advantageous to reflect on your musical tastes and eat potato chips than try to sleep.”

Then she did the sweetest thing of all and decided to reach out with kindness—she baked him a delicious pound cake!

Now they’re practically best friends, and we’re here for it.

Her tweet became so viral that people have even started asking her to bake them cake!

Candice later found out her neighbour—Tommy—lost his daughter earlier this year, and emphasized how important it is to always be kind.

“It was a sweet and gentle reminder that we never know what folks are going through and it is always best to lead with kindness. When we can extend grace, we really should,” Candice tweeted.

The world definitely needs more people like Candice…and cake too!