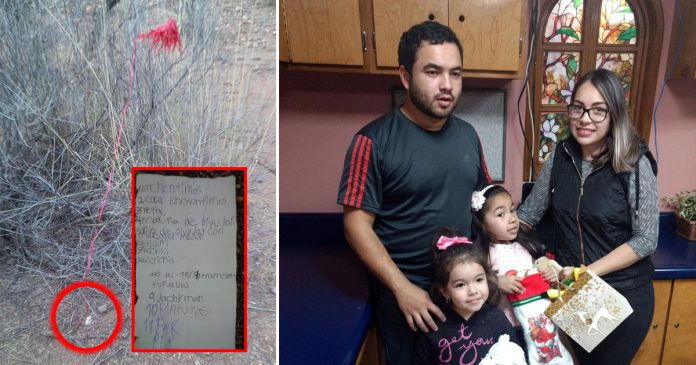 An Arizona man made an 8-year-old Mexican girl’s Christmas wishes come true after he stumbled upon a Christmas list she tied to a balloon for Santa while on a walk.

The handwritten list, which asked for presents such as a doll and dollhouse, clothes, slime and art supplies, was discovered by 60-year-old Randy Heiss when it flew across the US-Mexican border.

Randy spotted the torn up remains of the red balloon while walking with his dog and was thinking to throw it away.

But that’s when he spotted the note attached to the string of the balloon, with the name “Dayami” written on the front. He rushed home to ask his bilingual wife to translate the list, which was written in Spanish.

“My Spanish isn’t very good, but I could see it was a Christmas list,” Randy told The Washington Post.

Randy immediately made it his mission to track down the mystery girl and had a hunch she was from the city of Nogales, Mexico, just across the border.

Randy and his wife had lost their only child nine years earlier, so he was extremely moved by the list.

“Based on the prevailing wind, I was pretty doggone sure that’s where it came from,” he said.

He suddenly had a brilliant plan, and contacted a local AM radio station called Radio XENY, who agreed to help hunt Dayami down!

And within days, they found her! “It just changed my entire day,” Randy said. “Instead of going back to my office in Bisbee, I went with my wife to Walmart.”

Randy was thrilled, and rushed to Walmart to buy all of the gifts Dayami had on her list, plus a few extras.

After a 45-minute drive across the border to Nogales, Randy and his wife met Dayami and her 4-year-old sister Ximena, who were both over the moon to receive the gifts.

To keep the Christmas magic alive, the couple told the girls they were Santa’s helpers! How sweet!

“Their eyes were wide open with wonder,” Randy said of the two sisters’ reactions. “Like, ‘Oh, my gosh, this really did work!’ ”

“It was a beautiful, beautiful experience,” Randy said. “Quite healing for us.”

“We now have friends for life. And, for a day, that border fence with its concertina wire melted away,” he added.

This heartwarming story serves as a reminder of the true spirit of Christmas. Our faith in humanity is restored, and we hope your heart is as full as ours are!