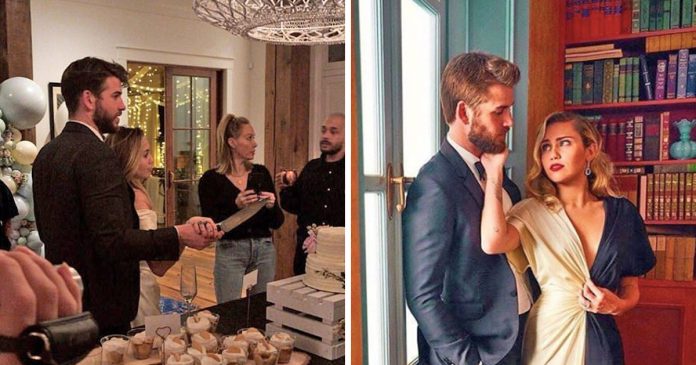 Hollywood stars Miley Cyrus, 26, and Liam Hemsworth, 28, appear to have finally tied the knot after their friend posted Instagram pictures of the sweet pair cutting a white tiered cake side-by-side.

Their surfer friend, Conrad Carr, posted the loving snaps of the pair, who have been engaged on-and-off since 2012.

Miley can be seen wearing a gorgeous white off-the-shoulder gown as she stands hand-in-hand next to Liam as they prepare to cut their wedding cake.

Miley’s mom Tish can even be seen the snapshot—which seems to confirm that the couple quietly tied the knot in the privacy of their home in Tennessee.

In a telling sign, giant pink balloons spelling ‘Mr & Mrs’ can be seen floating in the background of a short video, which shows Liam and his brothers in tuxes drinking shots together.

It seems like the cute couple had a super intimate gathering with only their closest friends and family members for their big day!

Miley’s sister Noah posted a picture of herself with tears running down her face, captioned with a broken heart emoji, suggesting their big day was emotional.

Liam and Miley made the decision to get married after their $2.525 million Malibu home was destroyed in the November California wildfires, according to an insider.

“She and Liam feel like their engagement has gone on forever and they both decided, at the same time, it was time to wed already,” a source told OK! magazine.

Miley said her and  Liam’s bond grew stronger than ever after the tragedy, which claimed the lives of at least 71 people.

She told The Howard Stern Show that Liam was her “survival partner”, adding, “I’ve never loved him more for this.”

We’re so happy for them if this is true! Congratulations Miley and Liam!