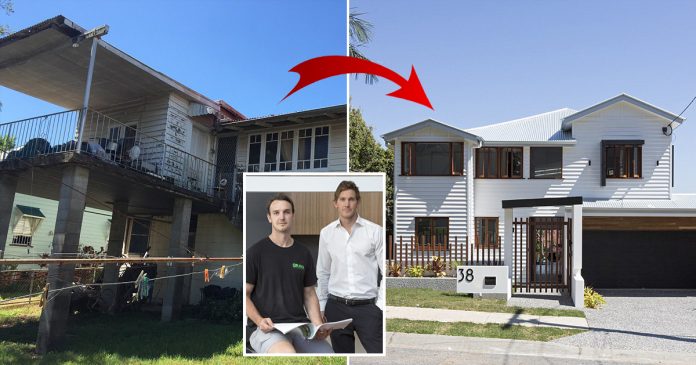 A neglected and run down home, known as the ‘Hoarder House’, which was filled with an awful stench and trash, has been transformed into a stunning multi-million dollar mansion by two genius brothers.

What was once a $800,000 sight for sore eyes was soon turned into a luxurious $3 million property, thanks to the brothers’ incredible renovation work.

The property, which formerly belonged to an elderly woman for 40 years, had crumbling walls, broken windows, and a stench which only went away after the wall lining was removed.

The most challenging part of the ambitious renovation project was removing the enormous stashes of trash from the property, the brothers said.

“It was literally all junk. Even when the rubbish was taken out the smell stuck around until we took out the wall lining, then it was better,” Rob told Daily Mail Australia.

The pair, under Graya Construction Builders, spent around $1million to transform the property, which now has a modern feel, with 3.6m tall ceilings.

And the project has given them both a huge sense of achievement!

“I really enjoyed it. It was awesome looking back at what you’ve achieved,” Rob said.

“Building a new house [from scratch] is a good feeling. But being what it was [Hoarder House] and changing it is probably better.”

From zero to hero. The gorgeous home is now worth an estimated $2million more than what the Grays paid. That’s seriously impressive!

The home is in a great location with gorgeous city views.

‘We’ve had some appraisal from real estate agents,’ Rob said.

We’re in love with the minimalist contemporary style. Beautiful!

Rob’s brother Andrew will soon be moving into the newly-renovated home—we’re jealous!