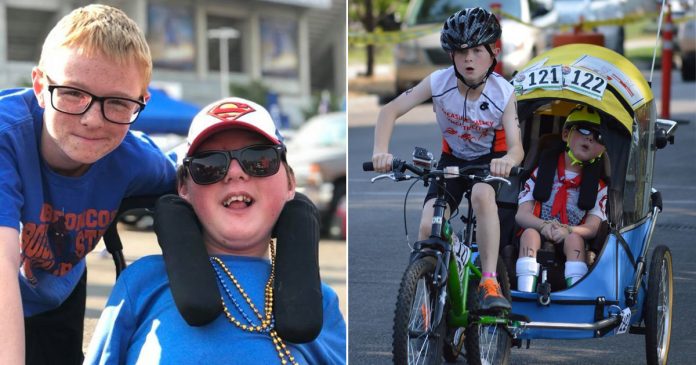 In July 2014, Noah Aldrich made headlines around the world for finishing a youth triathlon with his disabled brother, Lucas. Noah was only 8 years old while Lucas was 6 years old.

Since his brother, Lucas, could not walk and talk, Noah pulled and pushed his wheelchair throughout the triathlon. The triathlon was already tough for the young boy and having had to take care of his brother added to the pressure.

However, nothing could stop Noah from completing the triathlon together with Lucas

The two brothers had always been closed to each other and when Noah heard about the YMCA triathlon, he was determined to enter the competition with Lucas.

The then 8-year-old boy had a tight schedule to train himself for the triathlon.

He spent three months to train for the triathlon so that he could swim, run and cycle while carrying Lucas together with him

The triathlon marked the beginning of the two brothers’ active participation in more triathlons. Ever since they managed to complete their first triathlon together, Noah and Lucas later joined several other triathlons together.

“I can’t even keep track of how many triathlons we’ve done,” Noah said.

According to Noah, he just wanted his brother to be able to have the same experience as him and that was what pushed him to join the triathlons as a team with Lucas.

“I do triathlons with Lucas because he can’t do anything by himself, I just want to give him those experiences.”

“It felt really good,” Noah said. “Just Lucas’ smile is the best thing I could ask for, no award will add up to that.”

Lucas was diagnosed with a rare brain disorder called lissencephaly when he was just 3 months old.

“He can’t walk, he can’t talk, but he’s the happiest little guy you can ever imagine and he just loves being around people,” their mom, Alissa Aldrich said in an interview with TODAY Parents.

When asked about the special bond that Lucas and Noah share, Alissa said, “He’s so humble and it’s really all about Lucas,” Aldrich said. “I don’t think he would do triathlons if it wasn’t for Lucas

“In the end we just want people to remember Noah and Lucas for their love and kindness. I think the world right now isn’t so kind, and so having that as a legacy of brotherly love.”