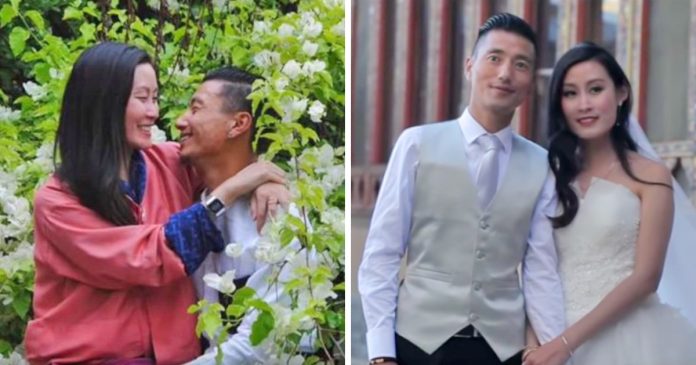 A Singaporean woman found her happily ever after she traveled to Bhutan for a week on holiday and fell in love with her tour-guide.

Australia born Karen Lim, who had been living and working in Singapore as a digital journalist and editor, took the one-week trip in 2017 on a whim, after going through a “turbulent” period in her life.

She felt compelled to visit the country of happiness after taking up meditation, which led to an interest in spiritual healing.

After considering both India and Nepal, she eventually chose Bhutan as the destination for her cultural solo trip in August 2017.

When she requested a senior tour guide with extensive knowledge of the country’s history and culture, she had no idea he would turn out to be the love of her life!

Now the loved-up pair are happily married and living in Bhutan’s capital, Thimpu, together. Pass us the tissues!

She immediately fell in love with her surroundings, saying the country made her feel at peace with herself.

“That kind of peace is something you’d probably experienced while you were a child: worry-free, no anxiety, calm, simple and seeing the beauty in the tiniest things,” Karen wrote on her blog, Life in Bhutan.

It was after hiking up to the world-famous Tiger’s Nest, a Bhuddist sacred site, that the pair fell in love.

“Magic happened. And I’m very lucky to have found her,” her tour guide, Ngawang, said.

After Karen returned to Singapore, she said she had left her “heart and soul in Bhutan”.

“I was no longer the same,” she wrote on her blog.

Ngawang and Karen kept in touch, and in February the following year, she returned to work for a year.

Then, the magic finally happened—he asked her to marry him!

The happy couple tied the knot in October, and their wedding was a mixture of Chinese, Western, and Bhutanese traditions.

“We fought to be together despite all the obstacles in our way and will continue to fight side by side. Because we both believe that love is not giving up on each other when times get tough,” Karen said.

Their story is seriously romantic. A huge congratulations to them both and may they both live happily ever after!

Watch their magical ceremony in the video below:

Tourists pickpocketed in London, later realise they filmed the faces of...