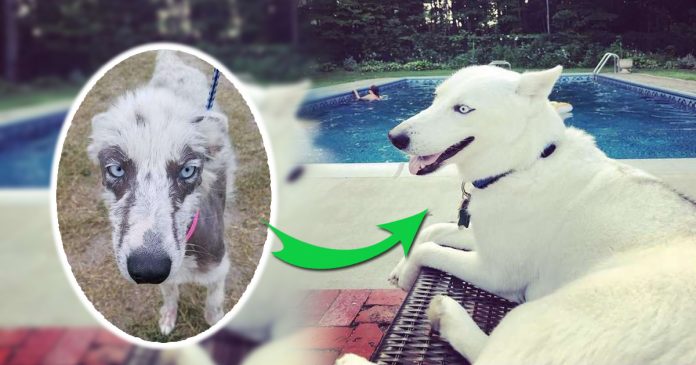 This is Skye, the one-year-old Husky mix that has been having it rough for months. This poor homeless dog on the streets of Palm Valley, Texas was suffering from tick-borne disease and covered in mange when animal control officers picked her up. As a result, this husky mix lost most of her beautiful white fur.

“We knew we had to pull her immediately because she’d die if we didn’t,” said the co-founder of Rescue Dogs Rock NYC Stacey Silverstein to The Dodo when she was contacted by an animal shelter about Skye.

When we thought she will have it better after being picked up, unfortunately, Skye was brought to one of the highest kill rates animal shelter in the United States. As she was in very bad shape and extremely sick, naturally her name was almost immediately placed under the euthanasia list.

The shelter didn’t have extra resources to care for a sick dog, but the people there really wanted to give her another shot in life. That is when they contacted Silverstein. Silverstein instantly said that she would take Skye in when the shelter contacted her and asked if she would take the poor stray dog.

Skye was in a bad shape.

“The shelter is the highest kill shelter in the country. The protocol at the shelter is that medical dogs get euthanized right away because they don’t have the means or space or anything to treat them,” explained Silverstein.

A volunteer for Rescue Dogs Rock NYC picked Skye up the same day. This is where her amazing transformation begins.

A week after meeting Skye, the mother fall in love with her and asked Rescue Dogs Rock NYC if she can adopt her.

“The mother has got little kids and little dogs, and Skye just kind of fit in perfectly like it was meant to be. She’s an incredible dog,” Silverstein told The Dodo.

Skye adjusted to her new home very quickly and loves to play with her three new little siblings.

Skye loves her human sister as much as she loves her.

Her fur grew and she got her amazing white fur back!

Such an incredible transformation in just a short time! She looked like a whole new dog!