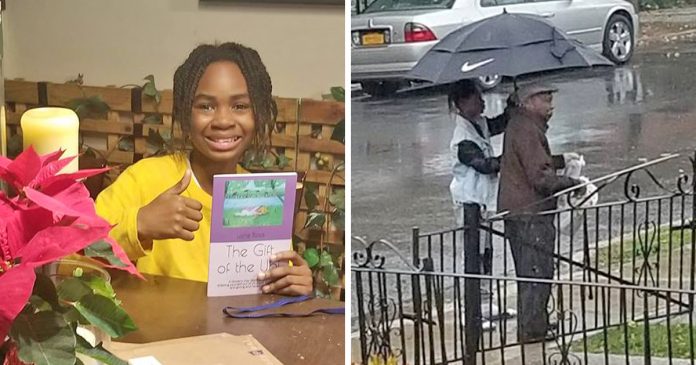 “He was like getting all wet, so I threw my mom’s jacket on, threw my mom’s shoes on, got an umbrella and ran downstairs,” said a 13-year-old Jordan Glover on why he was running out of the house just to help an elderly neighbor.

This middle schooler Brooklyn boy thought that it was the right thing to do when he noticed his 75-year-old neighbor Mr. Robinson walking in the pouring rain and drenched out without an umbrella.

Glover knew he did the right thing.

Recalling the moment, Glover’s proud mother Lizz Ingram told Yahoo Lifestyle that she was preparing dinner at home when she heard her son running down the stairs and went out of the house in the pouring rain.

“My kids don’t leave the house without permission. I ran down the stairs and I was going to say ‘Wait a minute, where are you going?’ and then I see he had an umbrella, and he held it over Mr. Robinson’s head.”

Glover was helping Mr. Robinson in the rain.

As a single mother, Ingram began taking the video just to share it with Glover’s father before she decided to take it to her Facebook. She wasn’t expecting that millions of people will be watching it since taking care of others is something that’s been instilled in her and her children.

“The notion that we are supposed to be courteous at all times comes from my upbringing,” said Ingram.

Glover and his mother, Ingram.

“You never know what people are able and unable to do. You never know anybody’s circumstances when you walk into their homes. You have to do things like this, it’s courteous,” told Ingram recalling her grandmother’s words.

Glover later explained that Mr. Robinson used to help him a lot and that what makes he didn’t think twice about drenching in the rain just to help him.

“He used to help me a lot. Sometimes with my homework and I saw him outside, I had to help him.”

Ingram usually didn’t like her son running out of the house without permission, but she made an exception to this one.

“I know that he knows it was the right thing to do. So I always tell him you don’t need permission to be kind.”

You did the right thing, Glover!

Watch the full video of his courteous act here: