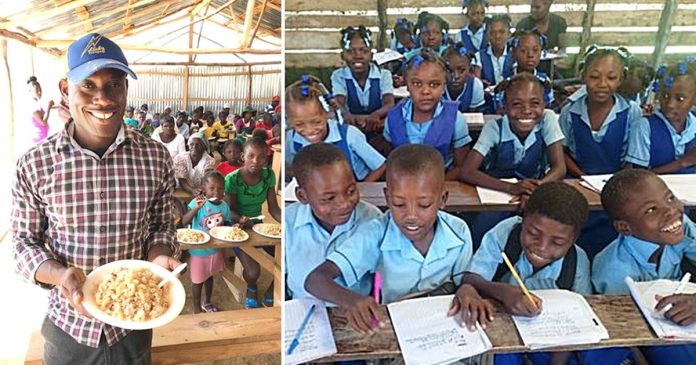 Jérémie Mercier, a 38 year old man from Haiti and affectionately known as Papa Jérémie by the 62 kids under his care. He gives unconditional love, faith, basic needs, and education to create a new life for the kids who came to him for refuge.

The smiling face of the selfless man.

It all began in 2010 when Jérémie was working for the United Nations. A deadly earthquake had struck Haiti, killing 230,000 people. He jumped from the third story of a high building to escape and lost consciousness when he hit the ground.

When he regained consciousness, he was horror-struck to find dead bodies of children laying around. Shattered, he questioned his purpose of existence. As he wandered the area, he found three children who were still alive and took them in.

That was the day he became Papa Jérémie. He took more and more children under his wing as he saw more of the devastation in Haiti. Soon, he was bombarded with calls for help, but he never said ‘no’.

Jérémie with one of his children.

One of Jérémie’s children with an electrical board he built himself.

The children loves him very much. As soon as he comes back to the orphanage bringing food and necessities, the children would run to him and grabs his shirt and pants, calling out “Papa! Papa!”

Jérémie at a village feast.

They just want to be near him and are even competitive over who gets to remove his shoes. These children are thirsting for love, and Jérémie gives them all he has emotionally and physically.

A few of Jérémie’s children at the orphanage.

He was destitute back then, Jérémie and his children were kicked out once for not being able to pay rent. He also struggled to feed them, sometimes not having enough to feed himself.

Jérémie now has a house and backed with a group of supporters mostly from the U.S. who work to obtain donations to help his mission, called Children of Tomorrow. One of the children he cares for has started college, while another child who was a drug addict when he first came to Jérémie, is now the top student in his class.

These children love to learn and are determined to do well for themselves.

He is one of the most selfless men you will ever know. Besides caring for his kids, he is also in charge of three villages where he helps the villagers grow food, build wells and schools and teach them how to raise cattle.

The villagers surround a well that Jérémie helped built.

If it weren’t for him, the kids who came to him would probably be leading a life of crime or homelessness just to survive.

To find out more about Jérémie’s noble work, please visit Children of Tomorrow.

“I never gave up” Former janitor graduates with nursing degree from...