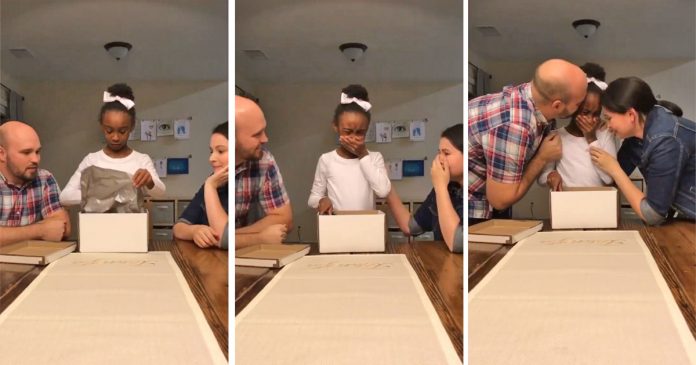 It’s been three years since the 10-year-old Ivey living in foster care with her foster parents, Paige and Daniel Zezulka. On her birthday, Ivey can’t stop crying when they surprised her with the gift she had always wanted—to be adopted!

It all started when Paige and Daniel Zezulka from Athens, Georgia decided to become foster parents and had a 5-month-old baby, Kai placed with them. At that moment, the Zezulkas were not aware that Kai had an older sister named Ivey and Kai’s birth mother was pregnant with Lita, the youngest child.

Paige and Daniel with their children.

The couple had spent time with Ivey through arranged play dates and outings and said they love her the moment they met her. Paige then received a call asking if they would foster Lita, who was just a few weeks old.

“I said yes without asking my husband. I knew he would have said yes anyway,” said Paige to GMA.

Almost as soon as Lita came to live with the Zezulkas, Ivey was moving into their home too.

“We were prepared for a hard transition for her. Her other family was prepping her. We made a new home for her with pink everything, fit for a princess. We wanted her to feel safe and loved. We thought it would be so hard for her—thought she would struggle,” told Paige.

The adoption process was long—it’s been two years when the family was first approached about adopting Ivey and Kai in 2016. When the Zezulkas finally get to legally adopt their children, they gave Ivey a surprised box to tell her about it.

“I’m going to be adopted?” asked Ivey in excitement but broke into tears a few seconds later.

Daniel Zezulka answered “We love you, sweetheart. We’ll always be your parents” and they we all hugging and crying together. Watch the emotional moment here:

The tearjerking video of Ivey’s reaction has now garnered more than 17 million views and counting!

They’re blessed to have each other.