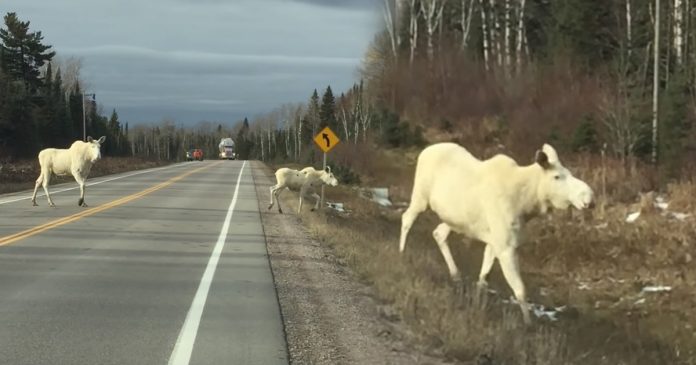 White moose is not a common animal that you can see every day, or even once in your lifetime. However, one lucky couple from northern Ontario, Canada had the privilege of a rare sighting when they spotted two white moose crossing a highway.

Nicole Leblanc didn’t think twice to capture that magical moment on her phone and share the extraordinary moment with the world. Leblanc and her husband were just casually driving to a camp near Foleyet when they suddenly saw the white moose.

The moose leisurely crossing the road.

“People are amazed. It’s not every day that you get to see it and I was able to tape it, it’s a beauty to see.”

When we see white animals, we often associate them with albinism. But for this white moose, that is not the case. People might have thought that their strikingly white color is due to them being albino, but the snowy white color they possessed is actually due to the Armstrong White Gene Strain, a recessive gene or genetic mutation.

White moose is not an albino moose.

These rare non-albino white moose are often called ‘ghost’ or ‘spirit’ moose. They can sometimes be called piebald, meaning they have specks of brown on their white coat, reported National Geographic. Also, their eyes have pigmentation, which clarifies them as a non-albino animal.

Moose is the largest member of the deer family and a full-grown moose can be taller than a horse and weigh over 1300 lbs.

Only male moose will grow antlers and the antlers can span up to 5 feet and weigh over 65 pounds.

On a side note, moose will lose their antlers once a year.

Besides being an excellent swimmer that are able to dive more than 5 meters underwater to find food, moose can also run up to 56 km/h. Which I’d say, pretty fast.

Moose knows how to swim.

White moose are rare in many parts of the world, but recently their sightings have been increasing in Sweden. Being a very rare species, white moose in Scandinavia face few predators except humans.

Hunters usually prefer not to target these animals due to their unique appearances.

The 1997 Fish and Wildlife Conservation Act prohibits the hunting of these unique creatures if they are more than 50 percent white, according to the tourism site.

For those living near Northern Ontario or tourist visiting the place, Tourism Northern Ontario stated that you can typically target a white moose along highway 101—the same highway where Leblanc captured her video.

Such a majestic creature!