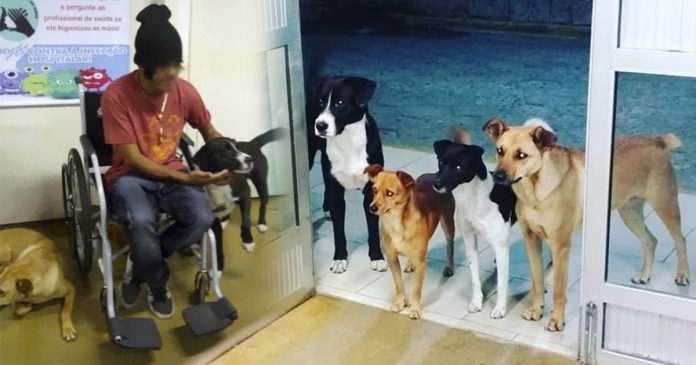 This homeless man might not have any family to be with him at the hospital, but sure has a few loyal friends that will be with him in ups and downs.

It was around 3 AM in the morning when a homeless man called Cesar came to the hospital to receive treatment and medication for a health problem that he has been suffering. Usually, Cesar visited another facility in the town, but that day he came to where Cris Mamprim and her colleagues work.

Mamprim is a healthcare worker at Hospital Regional Alto Vale in Brazil.

When Cesar entered the hospital that day, it didn’t take long for Mamprim and her friends to noticed that Cesar wasn’t alone and actually came with his friends. And this touching scene that they witnessed was just a glimpse of love in its purest form.

The staff saw a group of four faithful dogs patiently waiting for Cesar to return safely.

These loyal canine companions were just looking outside of the hospital’s front door and didn’t make any scene.

Cesar admitted that it’s common for him to forgo food for himself just to ensure his adorable friends were well fed.

“They are all well taken care of and chubby. Seeing them like that, waiting at the door, only shows how much they are cared for and loved,” Mamprim told The Dodo.

The dogs care for him as much as he cares for them.

The staff decided to invite Cesar’s dog friends inside to let them be in each other’s company. They also offered some food to Cesar, and of course, he saved some and give it to the dogs.

Such an amazing friendship!