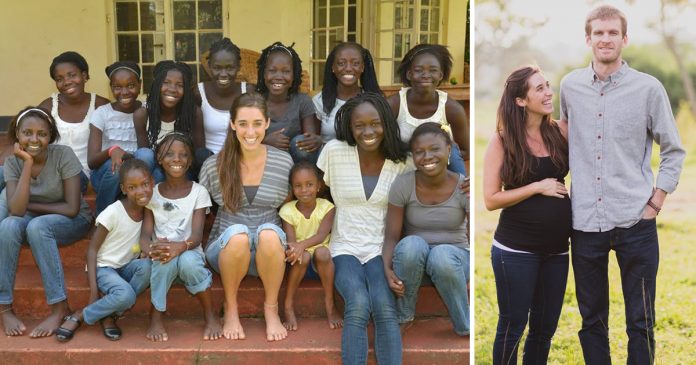 18-year-old Katie Davis ditched her life in Tennessee and took the ultimate leap of faith—instead of going straight to college, she packed her bags, moved to Uganda, adopted 13 daughters and found love.

She was senior class president, homecoming queen and led a reasonably lavish lifestyle in Nashville, Tennessee, with a convertible car, designer items and a boyfriend.

But she felt she was supposed to serve another purpose and change the lives of others.

“I quit my life… I quit college; I quit cute designer clothes and my little yellow convertible; I quit my boyfriend. I no longer have all the things the world says are important,” she told Today’s Christian Woman.

So, although Sarah initially planned her adventure as a year-long mission trip, she ended up founding an incredible ministry called Amazima in 2008.

Amazima describes its mission on Facebook as living out “the love of Jesus by educating and empowering the people of Uganda and the communities we serve.” What an amazing thing to do!

She even became a mom-of-13 after she started teaching in an orphanage.

When she was only 23 years old, she decided to raise 13 Uganadan girls as her own, saying the felt led by God to do so.

“God made it clear to me that we were to be a family,” Katie said.

She said looking after them isn’t always easy, loving the children let her experience what it is really like to truly love someone else.

And soon the inspiring woman found the love of her life and they soon had a baby of their own!

Katie met fellow missionary Benji Majors who grew up in the same town as her in Tennessee. What a coincidence! She believes fate brought them together.

The adorable couple tied the knot in 2015, which was attended by their 13 beautiful daughters.

This inspiring story should remind us all to always be mindful of how we can help and care for those in need!