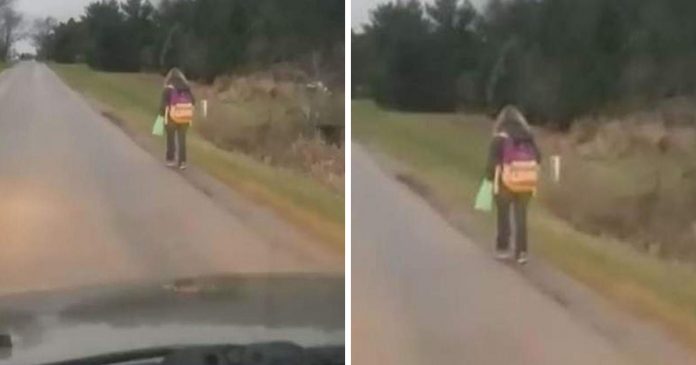 Matt Cox from Swenton, Ohio is a father of four who took his parenting role very seriously. When his daughter, Kirsten, was caught for bullying her schoolmate and suspended from taking the school bus again, Cox decided he wouldn’t give in when she asked to be driven to school.

Instead, he made his daughter walk to school while he drove slowly behind her.

Cox recorded a video of his daughter walking to school and narrated the incident, “This lovely lady is my 10-year-old daughter, who has been kicked off of the school bus due to bullying another student.”

He added, “Friday, when my daughter brought home the paperwork for her bus suspension, she said, ‘Daddy, you’re going to have to take me to school next week.’ As you see this morning, she is learning otherwise.”

Cox followed his daughter closely behind when she was forced to walk to school.

The two-minute video that showed Kirsten walking five miles in a 36-degree weather has gone viral and parents who viewed it are divided over the choice of punishment. Some parents think that it was bad parenting and bordering on child abuse, while some criticized his act as an unneeded humiliation for his daughter.

Let’s hope she has learned her lesson!

But still, he received a multitude of praises for doing a job well done as a father. Supporters have pointed out that he followed her on her way to school, making sure that she was safe. They believe that she will be thankful for this lesson when she’s older, calling it tough love.

Cox knew that not all parents would agree with his choice of punishment, but it’s alright because he is doing what he feels is suitable in teaching his daughter a lesson. He also wants kids and parents to take the threat of bullying more seriously.

“I just want the kids to know that words truly do hurt, they cut very deep and have lasting effects,” Cox said. “And I hope that parents hold their kids accountable when they do something wrong.”

What an inspiring thing for parents everywhere. No good will come from spoiling the kids. Please share with other parents if you agree that this is a good approach too!