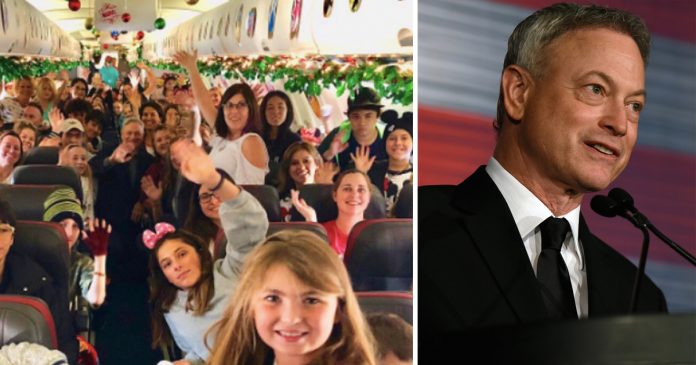 Over 1000 children of fallen U.S. war heroes were treated to a magical five-day all expenses paid trip to Disney World thanks to the “Snowball Express”—an official program of the Gary Sinise Foundation.

They were given the trip of a lifetime on Saturday for their parents’ brave and selfless sacrifice.

The 63-year-old Forrest Gump actor Gary tweeted, “Over 1000 Gold Star Children travel w/ surviving parent, 1,750 in all, via @americanair to Disney World today as part of our @GarySiniseFound Snowball Express program. This charter left LAX this morning. I’ll join up in a few days. Have fun kids! We love you!”

As the kids and their surviving parents boarded the plane in Nashville Airport, they were given a huge and touching sign of respect—everyone stopped to sing the national anthem while soldiers saluted the children.

What a beautiful way to honor the loved ones of those who died serving their country! Each flag representing the fallen hero of over 600 families who attended the event.

It was the perfect way to for the children and spouses of fallen soldiers to celebrate their holidays in a magical way.

Jen Triangale, who witnessed the big surprise uploaded a video with the caption, “Most every person standing around, myself included was bawling at the sight of these kids and spouses who have paid so great a price for our country.

“To see all of this at Christmas time was so humbling. Seeing the general public in an airport stand still to honor these kids was simply beautiful.”

Widow Jennifer Hanson, who joined the Snowball Express with her 8-year-old daughter, said the experience has brought some relief to her pain after losing her other half.

“It was the first time since losing my husband that I went five days in a row without crying. Sure, there were a few moments of filling up with tears. However, those were tears of gratitude and pride.”

What a sweet thing to do, these kids deserve all the happiness in the world, and we hope they enjoy their holidays!

Watch the magical moment in the video below!

I witnessed an international airport come to a complete stop today … At the Nashville airport I walked out into the concourse to this scene @americanairlines was flying a plane full of children who had lost a parent in combat to Disneyworld on an all expenses paid trip and they threw a party for them at the gate❤️But when they announced them over the loud speaker and they lined up to board the plane the whole airport literally stopped and sang the national anthem with military present in salute. Most every person standing around, myself included was bawling at the sight of these kids and spouses who have paid so great a price for our country. To see all of this at Christmas time was so humbling. Seeing the general public in an airport stand still to honor these kids was simply beauitful. @bna_airport #nashville #fallenwarriors Gary Sinise Foundation #america #snowballexpress #christmas Garysinise

Man gets electrocuted to death while playing games on charging mobile...