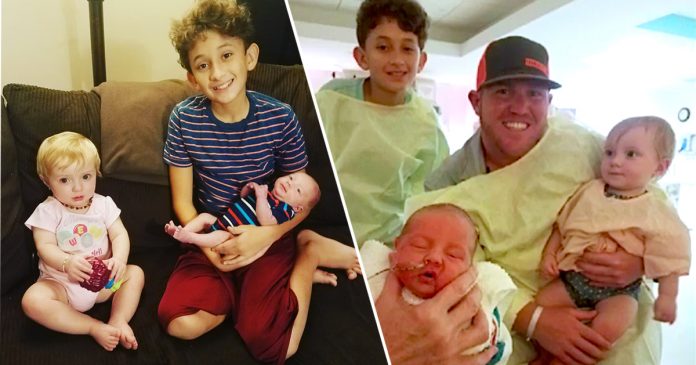 Jayden Fontenot was only 10 years old when he became an unexpected hero in Louisiana. Not only did he deliver his premature baby brother in the house, he saved him with his quick-thinking when the baby was found not breathing.

Jayden’s mom, Ashly Moreau, went to the bathroom one morning when her water suddenly broke. It was more than a month ahead before her baby was due.

Bleeding profusely, she looked down and saw the baby’s feet sticking out, meaning that the baby was in a breech position, and increasing the risk of complications.

She told Jayden to run to the house next door where his grandmother, Francis Soileau was staying. However, she wasn’t able to help because she was still recuperating from a back surgery. She called 911 and he ran back to her mother.

Ashly said to her son, “You need to deliver your baby brother and it needs to be quick. His feet are turning blue and he can’t breathe.” Jayden said, “Tell me what to do and I’ll do it.”

Following his mom’s instructions, Jayden gently rotated his baby brother to move him out of the breech position. However, when the baby was delivered, they found he wasn’t breathing.

Thinking quick, Jayden grabbed a nasal aspirator used by his 11-month old sister, Remi, on his newborn baby brother. He pumped air into the baby’s nose and mouth, helping him breathe and saving his life.

Jayden borrowed his sister, Remi’s nasal aspirator to save his baby brother’s life.

The emergency medical technicians arrived with an ambulance right when the baby had started to breathe. They brought them to Lake Charles Memorial Hospital.

The responders were impressed with what Jayden did!

Ashly’s fiancé, a mechanical engineer who was working during the entire ordeal, rushed to the hospital when he heard what happened.

Mom and baby are safe now, all thanks to Jayden.

Due to the excessive bleeding, doctors later said her placenta was detached from her uterus wall, which caused the premature birth. Her newborn son named Daxx, is expected to come home in another week.

In recognition of his heroism, Jayden will be honored by the mayor and first responders at Maplewood Middle School.

Ashly believes that he will always have a special bond with his baby brother. What an amazing superhero!