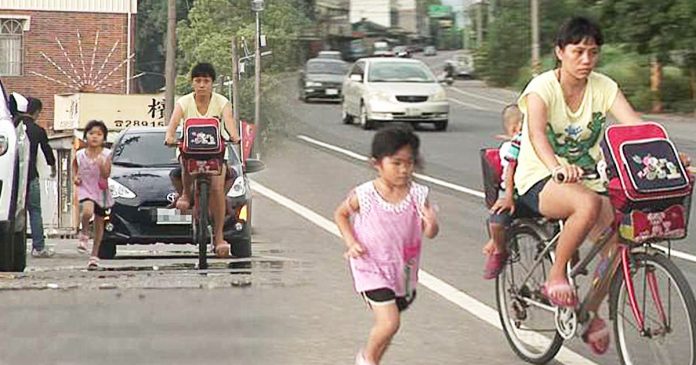 In a country where modern transportation is mainly used for convenience, there is still an unlucky few who does not have these options and are forced to stick to older methods. One such instance is this woman who has to ride a bicycle everywhere she goes, together with her children.

This small family lives in the village of Trung Hoa of Gia Nghia district, Taiwan. Every day after school, the villagers would see this young girl running alongside her bicycle-riding mother. Turns out, she refuses to ride with her mother in order to give space to her little brothers.

The little boys with their mother on the bicycle.

Look how strong she is to be running after a day in school!

This joyful little girl does not feel inconvenienced at all. Anyone laying their eyes on her would definitely say that she is the definition of young and strong.

She would run for a distance of 1.3 miles, approximately 2km from her kindergarten to her house.

She would run for about 20 minutes each day.

Since her father is busy with work and could not fetch her from school, the task was done by her mother. Despite not being able to ride on the bicycle after a long, tiring day at school, she isn’t fussy about it. In fact, she enjoys running on the streets considering it a sport.

Concerned about her daughter’s safety, Wu Wu’s mother always makes sure to not ride the bicycle too fast so that her daughter is able to catch up. She constantly keeps her eyes on Wu Wu to make sure she is on the safest side of the road.

The video of Wu Wu running alongside her mother and two brothers has drew sympathy and admiration from viewers worldwide. Many volunteered to gift Wu Wu a bike to ease her future journeys to and from school.