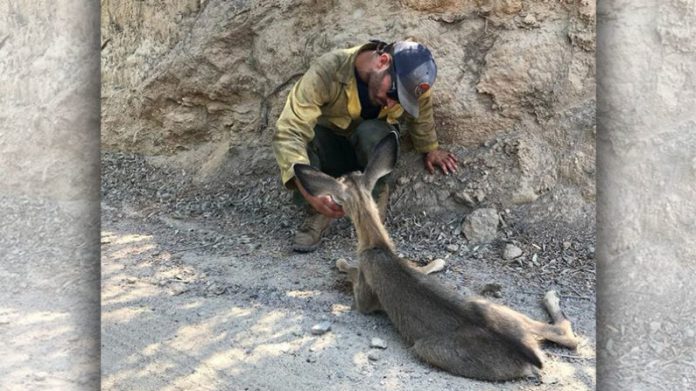 Photos of firefighters who cared for a baby deer went viral and have received high praises for not ignoring the poor thing.

They were the assigned firefighters from the Los Padres National Forest team.

And the firefighters gave the fawn a drink before helping her back on its feet, hoping that it would survive the great fire

Their compassion has certainly made a big difference to this baby deer and reminded us to show empathy and care for all beings.

“God bless all of the men and women firefighters who have kept us all safe and out of harms way and this sweet baby deer. Your humanity and selflessness keeps me in awe of who you are and the amazing work you have done here,” one Facebook user wrote.

Another commented: “So touching. You men aren’t just brave but also so sweet, kind and tender. Keep on staying safe! Thank you from the bottom of my heart.”

The heartwarming captures were posted on the U.S. Forest Service – Cleveland National Forest Facebook page and shared more than 10,000 times.

“All my life I knew firefighters were there to fight fires and I respected that. But until they fought a fire in my neck of the woods, my eyes saw up close what they had to endure to keep us safe. It has forever changed my perspective of what true heroism is,” wrote another.

Holy Fire swept across Orange and Riverside County of Southern California on August 6, 2018 and was reportedly contained by September 13, 2018

Some new activity is occurring around the #HolyFire and is very visible from surrounding communities. Resources have…

Although there were no human fatalities reported, mandatory evacuations were ordered during this period and has affected lives of residents and animals alike

#Holyfire new mandatory evacuations for Elsinore: in effect for all homes on the mountainside of Lake St and southwest of Grand Ave to Ortega Hwy