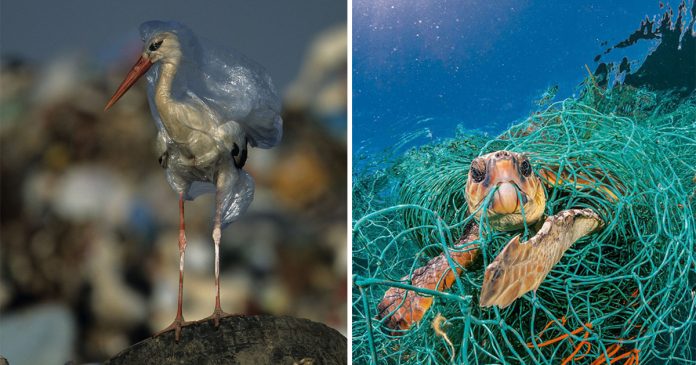 National Geographic has just launched its latest issue for June 2018 and its cover instantly made headlines around the world. Apparently, there is a very powerful message behind the cover image and it is terrifying.

The magazine’s latest edition features its initiative, “Planet or Plastic?” with a partially submerged plastic bag in the ocean, suggesting that the world’s plastic pollution problem is “just the tip of the iceberg.”

The brilliant and critical photo illustration was created by Mexican artist, Jorge Gamboa

Just like how the plastic bag emerged from the ocean partially with just its small corner being visible, the image creates a powerful message that our plastic pollution problem is actually far more outrageous that it may seem.

“For 130 years, National Geographic has documented the stories of our planet, providing audiences around the world with a window into the earth’s breathtaking beauty as well as to the threats it faces,” Gary E. Knell, CEO of National Geographic Partners, told the Daily Mail.

“Each and every day, our explorers, researchers and photographers in the field witness firsthand the devastating impact of single-use plastic on our oceans, and the situation is becoming increasingly dire.”

“Through the Planet or Plastic? initiative, we will share the stories of this growing crisis, work to address it through the latest science and research, and educate audiences around the world about how to eliminate single-use plastics and prevent them from making their way into our oceans.”

Scroll down below to see more powerful images:

If you are concerned about our world’s plastic pollution crisis, check out National Geographic’s campaign here.

You also can be a part of this campaign and make a difference.

88-year-old Japanese grandma learned how to use camera for the first...